Sabudana Khichdi is a gluten-free, savory pilaf made with tapioca pearls and it's quite possibly one of the easiest and tastiest foods you will ever cook and eat. Learn how to make a fool-proof, non-sticky version of this popular Indian breakfast/snack with just a handful of ingredients. A vegan, gluten-free, soy-free recipe, can be nut-free.

For me, a Sabudana Khichdi was the highlight of the days when my parents--both or either--were on a fast. And if you know anything about Indians, you know that would be pretty often.

Long ago, someone in India discovered the fastest way to the almighty's ear was through an empty stomach--your empty stomach. As a result, religious fasting, done ostensibly to invoke the gods and goddesses into granting you wishes, caught on like wildfire. And given that Hindus have a pantheon of 33 million gods to please, each with a unique job, you can imagine just how many fasts were spawned.

Want a baby? There's a fast for that. Looking for a bride or a groom? Yep, we've got one for that too. Taking an important test? There's more than one kind for that!

Religious holidays are also a popular time for fasting and right now, India is in the midst of Navratri, which is nine days of toasting woman power, or the goddess Durga, who happens to be the most kickass of Indian goddesses--and I mean that literally. According to Hindu mythology, Durga killed this terrible, invincible demon who was terrorizing humanity over nine days of fierce battle. So each year, for nine nights, the young and old come out full force to celebrate her and dance in large, community gatherings. Many also fast during this time.

But if you know anything about Indians and fasting, you know that we don't see fasts as a time for witholding food. No, sirree. In fact, fasters frequently pack in more food than they would otherwise. The way they do it is by cooking up and eating foods they don't normally eat -- that way the gods are happy you're giving up your usual food and you don't have to sit around starving all day, see?

A lot of this cheat food is gluten-free. And there's usually lots of it, all delicious, of course, because you'd have to be a fool to cheat with horrible food, wouldn't you? 😉

One of those delicious fasting foods is Sabudana Khichdi.

Sabudana Khichdi is light on the stomach and savory, so it has the desired effect of not making you feel like you went too far, while tasting good enough to make the idea of fasting more than bearable.

I love food too much to associate myself with a fast, for any reason, but I do adore Sabudana Khichdi and I often cook it up for a quick breakfast or a snack, as do so many other Indians. Jay and Desi love it too.

This is an incredibly easy dish to make with just seven ingredients. There's no extensive cutting and chopping required. And it's one of those traditional recipes with which almost no one tampers because whoever made it first simply got it exactly right.

Not many foods you can say that about. 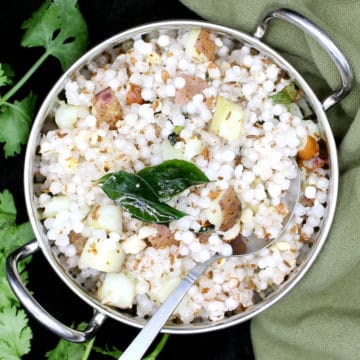