A Rava Idli, made with sooji or farina, is an easy, quick version of this perennial south Indian tiffin favorite. My recipe makes soft, fluffy and spongy rava idlis, and it come together in minutes, without the day-long process of soaking and fermenting lentils and rice that goes into making a traditional idli batter. A healthy, vegan, soy-free recipe, can easily be nut-free.

An idli is rather like the Cinderella of south Indian cuisine. Compare her to other stalwart favorites like crispy, flamboyant dosas that spill over your plate, and golden, melt-in-the-mouth vadas, and the Idli comes across as rather humble, even plain. Worse, try eating her by herself and she is, to boot, bland. After all, there's nothing more to a generic Idli than urad dal, rice, and salt.

In our home, idli is a perennial favorite. Both Desi (my resident Tamilian) and Jay love 'em and I end up making them almost as often as I make dosas. But as with dosa, an idli batter, while not at all difficult to make, requires a day-long process of soaking lentils and rice and then blending it all up into a batter, then leaving the batter to ferment overnight.

With Rava Idli, like this one I'm sharing today, you can bypass all of this work and bring your batter together in all of 15 minutes of hands-on time. Another 15 minutes of steaming and you're good to eat.

The process of making a rava idli begins out very much like making upma, another popular south Indian tiffin dish, and the ingredients are also much the same.

You will need a contraption/mold to steam the idlis in that's usually sold in Indian stores or online as an "idli stand". If you're Indian, you are no doubt familiar with this, but if you aren't, it is usually a three- or four-tier steel contraption with shallow, round, concave indentations where you pour in the batter before bunging the whole thing into a steamer. A few minutes of steaming sets the cakes and you can then slide them out with a spoon or a knife to get those little rounds of moon-like idlis.

You can also buy a steamer that the stand goes in, but you really don't need it. You can simply use a large pot or, if you have one, a pressure cooker.

How do you make the perfect rava idli?

You will need rava or sooji or semolina for this recipe. You can use the one sold in Indian stores or online as "sooji" or "rava" or "farina".

Toast your sooji with the spices until it becomes fragrant--your nose will tell you when it does--before adding the liquids to it.

You can vary up the spices and ingredients you add to your rava idli to your liking. For instance, you could add veggies, like grated carrots or bell peppers or onions. Or you can add in chopped nuts, like cashew. I keep mine simple, with just a few spices and cashew nuts. Keep in mind, if you add veggies, that you shouldn't go overboard if you want your idlis to form and hold after steaming. About a cupful is more than enough for this recipe.

Yogurt adds a lovely lightness and flavor to the rava idli, especially in the absence of the fermentation process an idli would usually go through. I use my own homemade cultured cashew yogurt, but you can use any storebought unsweetened yogurt. Cup for cup, you'll need as much yogurt as sooji for this rava idli.

To achieve the perfect, spongy texture in your idlis, add a dash of baking soda. Indian cooks often use a fruit salt called "Eno"--used to aid digestion--for idli-making, because it has baking soda as one of its ingredients. Unless Eno's all you have, I'd recommend just adding the baking soda.

Rava idlis can be white or yellow--the yellow tinge in mine comes from turmeric, which I add with the other spices. You can always leave it out if you want whiter ones (they won't be as white as regular idlis because of the other spices).

After you've roasted the sooji, add the yogurt and let the mixture sit for 15 minutes, so your sooji has time to absorb the yogurt, before adding the water to make a batter. The batter should be consistent and thicker than a pancake batter.

Oil the idli molds or spray on some cooking spray before you scoop the batter into them. This helps the idlis slide out when they're done. If you skip this step, your idlis will stick!

Steam the idlis in a pressure cooker with the pressure regulator (whistle) off, or in a large pot with a lid that has a vent hole, on high for four minutes and then on medium-low for 10 minutes. A steady stream of stem should emanate from the pot after the first four minutes.

Turn off the heat after the steaming's done, open the lid, and let the idli rack stand for 5-10 minutes. Run a sharp knife around the edges of the idli and slide them out.

What do I serve rava idli with?

I love eating rava idlis with a coconut chutney. It also goes very nicely with this roasted red pepper chutney or with an onion chutney.

Idli also pairs beautifully with a south Indian dal like this onion sambar or pumpkin sambar.

Is a rava idli as healthy as a traditionally fermented idli?

Depends on what you're looking for. A traditional idli is gluten-free and made of rice and lentils, and it goes through a fermenting process that makes it probiotic and even healthier. A rava idli is made with wheat, but you have an opportunity to add healthy veggies and nuts to it, and it also has probiotic yogurt in it. Rava idlis also, in my experience, tend to be more kid- and crowd-friendly. 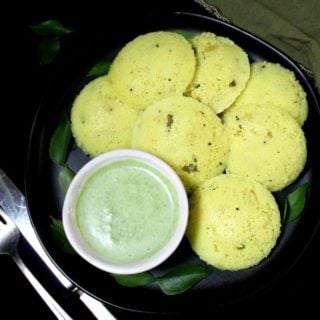 Nutrition info is for 1 idli.