Kachori is a beloved savory Indian food with a crispy, flaky jacket of wheat wrapping a savory, spicy filling of moong dal. This homemade version makes the perfect snack for a cold evening with a cup of hot tea. A vegan, soy-free and nut-free recipe.

It's hard to translate the Hindi word "khasta," often associated with savory Indian snacks, unless you use a combination of terms like, "crispy, crackly, flaky, brittle." But even then, they come short.

If you really want to know what "khasta" tastes and feels and sounds like, you should try a kachori.

Kachoris were popularized around India by the Marwaris, traders from the western Indian state of Rajasthan, who settled across the length and breadth of the country, bringing with them delicious, if often rich and indulgent, foods.

Growing up in diverse Bombay I had a handful of Marwari friends and acquaintances at school and in the neighborhood. But it was while living in Pune for a year that I really learned so much more about the people and food of Marwar. I don't know much about Pune anymore, but back in those days Marwaris, who had lived in the city for generations and ran many of the businesses there, had assimilated easily and effortlessly with the native population. As a result, their foods, like kachori, had also become part of the city's foodscape.

It is easy to see why. This tasty, pot-bellied snack is the best kind of eats there is. Think samosa, but different, and differently delicious.

There are many kinds of kachoris, but this Moong Dal Kachori is the one that's most familiar and easily found across India. Jay loves 'em and is often after me to make them. I try and keep things as healthy as possible around here so I don't always oblige, but how can one resist such deliciousness all the time? And kachoris, although deep-fried, offer some healthy elements, like that incredibly lovely filling of moong dal.

My philosophy with homemade deep-fried foods is to make them occasionally and eat in moderation. If you feel the same way, put these on your list for your next indulgence. You'll be back for more, I promise.

What we love about these kachoris

What flour should I use?

You will need maida for this recipe, a kind of flour used for pastries in India. Maida has a lower protein content than all purpose flour and therefore less gluten, which makes it perfect for foods like samosas and kachoris that should be flaky and crispy. Think of it more as cake flour than all purpose flour. You can find maida at the Indian grocery store or online quite easily if you live here in the United States or anywhere outside India. At a pinch, sub with all purpose flour; your recipe will be delicious but not as khasta.

What oil should I use for the kachori instead of ghee?

Ghee is usually added to the maida flour when it is kneaded, to create that flakiness. As ghee is not an ingredient we use hereabouts, I use coconut oil in the kachori dough. Coconut is not a flavor you'd typically find in Rajasthani food, and you know how persnickety I get about staying with the true flavors of regional cooking, but here it disappears into the other, bold flavorings so you won't taste it, especially after you fry the kachori in peanut oil or any other kind of oil. Use oil that's solid at room temperature--put it in the refrigerator for a bit if its liquid--and once it's ready, rub it into the flour to make the flour grainy, then add water and knead.

How to make the dough

The dough needs to be kneaded until smooth and it should be soft and pliable but not sticky. Set it aside for about 30 minutes before making the kachori.

What lentils to use for the kachori stuffing

You'll need moong dal for this filling. This is the split yellow mung bean without the skin on. Soak the mung for at least two to three hours before you cook it, and, if you have the time, overnight. If soaking for a shorter time, use warm water. You want it to soften as much as possible in the water. Then blitz the dal slightly so it breaks into smaller bits but doesn't become a paste--some of the lentils should remain whole. This helps them cook fast on the stove.

What spices to use in the stuffing

Fennel seed is the most overriding spice in a kachori, and it is gorgeous here. This spice is used commonly used in foods around India, and often offfered as a digestive at the end of a meal, but the Rajasthanis know how to treat it right and give it the dignity it deserves. They mix it into theis sabzis and curries, more so than other Indian cuisines, and it is indispensible in a kachori. In addition to the fennel you'll need coriander seed, dry red chili peppers, cumin seed and turmeric.

Because the mung bean is soaked, there'll be moisture in the filling and you need a binder, so add besan or ground chickpean flour. This also enhances the flavor of the kachori. You will also, of course, need salt for the kachori.

What's the best temperature for frying the kachoris?

Fry the kachoris at a temperature of between 325 to 350 degrees Fahrenheit. If you don't have a frying thermometer, drop a tiny ball of dough into the oil and it should bubble and float to the top but not brown immediately.

Don't overdry the filling when you cook it. It should be able to hold together in a ball. This is important because you will flatten the kachori after stuffing the dough and forming a ball and a very dry filling will not let you do that.

I included a few photos to show you how to stuff a kachori by pinching the dough into a circle and without a rolling pin, because that's how it's usually done. That said, I would advise you to use a rolling pin, if you have one. That's because when you form the disc with your fingers, unless you're experienced at doing this, you'll probably end up with an uneven, lumpy circle that's lumpy in bits and thin in others. Using a rolling pin is just more likely to guarantee you will get an even circle.

The circle you form should be small, no more than three inches across. Place a ball of the filling inside it and then bring up the sides and gather them at the top. If you have a lot of excess dough, pinch it off. Using the palms of your hands, roll the kachoris until they are smooth and even.

Before frying, place each kachori between your palms and flatten it with slight pressure. 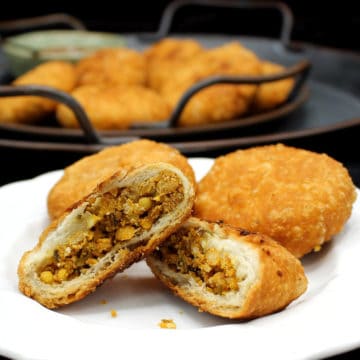 For the kachori dough

Put the kachoris together