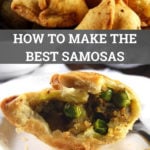 This Punjabi Samosa is as traditional as it gets, potato-pea stuffing and all. It's crispy and flaky and spicy and, to cut a long ode short, just as a samosa was meant to be by the genius who invented this hand-held snack synonymous with Indian cuisine, restaurant appetizers, and rainy days.

I get so caught up so often in making healthier versions of traditional recipes, often with many twists and turns along the way, that I forget what it's like to enjoy the original. On this blog, I've posted many stuffed savory pastry recipes, including baked samosas with a chickpea filling, and vegan keema samosas. But as delicious as they all are, this traditional Punjabi Samosa is in a class of its own.

I have in the past made whole-wheat wrappers to encase my samosas, but because I was going the traditional route this time, I made the wrappers as they are supposed to be made -- with all-purpose flour -- which creates that perfect flakiness.

You do need a few special ingredients if you want an authentic flavor, like the ajwain or carom seeds for the wrapper and the pomegranate seed powder for the stuffing. Both are easily available online or at Indian grocery stores. Ajwain, especially, gives the wrappers that very special taste your tastebuds likely haven't forgotten since the last time you ate a samosa. You can leave them out if you absolutely can't find them, but it's worth trying to.

One of the things to keep in mind, if you want that perfect flaky wrapper, is that the temperature of your frying oil has to be at 300 degrees Fahrenheit. The samosas should bubble just lightly when dropped in the oil. This ensures that the wrappers fry up all crispy and golden brown and flaky, and not soggy and clogged with oil. Peanut oil would be traditional to fry these, but if you don't have that, use any other unflavored variety that you like, like avocado oil. Do not use coconut oil because its strong flavor will change the taste of your samosas.

Once made, the samosas will probably disappear in minutes (as they do in our home), but if you are wondering, they will last about a week in the refrigerator in an airtight container.

In Bombay, and over the rest of India, samosas are a popular street food, sometimes served encased in a pav ( a soft roll), or torn into pieces and smothered in a chickpea sauce, chutney, tomatoes and onions in a samosa chaat, among many improvisations. But even all by itself, the samosa remains the ultimate snack not just for Indians but for foodies worldwide. Serve this Punjabi Samosa with a traditional date-tamarind chutney, like this one from my Bhel recipe. It's a gastronomic experience to sink your teeth into one and hear it crackle back at you.

What pastry is used to make samosas?

Samosas are typically made with a homemade dough with some oil and salt and carom seeds added to it.

You want a firm but pliable (not soft) dough for the flakiest, most tender samosa wrappers.

You can use puff pastry to make baked samosas, and they're delicious, although not traditional.

Traditional samosas in India are a vegetarian food, so they don't include animal products (unless specified) and they are usually vegan when you buy them at restaurants, here in the United States or in India. Most home cooks will make them vegan too. Some cooks may add ghee or butter to the pastry dough, but it is really not needed at all.

Can I bake these?

You can, and you'll get pretty yummy results, although the wrappers won't be as golden or flaky, of course. Brush the samosas with oil, place on a baking sheet coated with cooking spray, and bake in a preheated 350-degree oven for 40 minutes, flipping them over halfway through.

Can I mix up the ingredients?

You can! Potatoes and peas are a traditional filling, but I sometimes make samosas with a chickpea filling, or with a vegan "meat" filling (you can find both on the blog). You can use almost any quick-cooking vegetable in the stuffing.

Can I make these in an air-fryer?

Yes, once again just brush them with oil or cooking spray and pop them in.

Can you freeze samosas?

Yes, you absolutely can, but freeze them before you fry them. After you've made the samosas, arrange them on a baking sheet and freeze them. Once they're frozen, put them in a Ziploc bag or airtight container and freeze. Thaw before frying. You can freeze the samosas for up to three months.

Depends. 🙂 The stuffing in samosas is rather healthy, but this is a deep-fried food, of course, and therefore it doesn't exactly fall under the category of health food. You can make baked samosas which are certainly healthier, and use a more nutritious filling, like chickpeas or lentils. 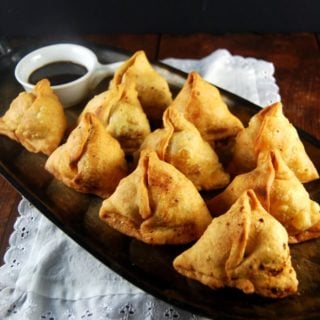 For the samosa wrappers:

Make the dough for the wrapper: