Vegan Gulab Jamun is an Indian dessert to die for. These gulab jamuns come together in a jiffy, using bread and cashew cream, but they are so delicious, no one can tell they are divinely dairy-free.

A gulab jamun is the ultimate Indian dessert. You've likely run into these red-gold orbs of deliciousness scented with cardamom and dunked in a flavorful sugar syrup at an Indian restaurant. Or you've likely tried making them at home. Either way, you know that to eat one is to fall in love with it forever.

Traditionally, the gulab jamun, like most Indian sweets, is made with cream, or a reduction of milk called khoya. But the version I have for you today is vegan, of course, and therefore uses neither: instead, it uses a common ingredient that you likely already have in your kitchen, white bread, along with cashew cream.

The milk is completely unnecessary: the bread jamuns are just as delicious and no one will be able to tell the difference. But moving away from dairy can make a world of a difference: to your own health, and to the health of the millions of cows caught up in India's milk production system.

I am always a little amused when people I meet assume, more often than not, that my veganism is a byproduct of being Indian born. I was not raised in a vegetarian household, and the truth is, only about 30 percent of India's population is vegetarian (not vegan). Indian vegetarians have always included generous amounts of milk products in their diet. Ghee, yogurt, buttermilk and milk are eaten every day in most homes, and their consumption -- and the production of milk -- is on the rise in India.

But at the same time, there is an almost naive lack of understanding among most Indians about where that dairy comes from. The cow is revered as holy by Hindus, but no one really seems to question the cruel abuse of cows in factory farms and tabelas that supply India's greed for milk. For those who still believe that cows do not die to produce milk, here's some food for thought: what do you think happens to the male calves, while you're busy glugging the milk produced by his mom-- for him? He either gets turned out onto the streets or is starved to death or gets sent to a slaughterhouse, along with tens of thousands of others like him.

And what happens to the mom, kept in a constant state of pregnancy through artificial insemination until she's four or five, once her usefulness has waned and she can't produce milk anymore? Until recently, she -- despite still having more than a decade of living left in her -- would have been sent to slaughter (India is one of the world's largest beef exporters). But under a new law passed very recently, cows in India can't be slaughtered anymore. While that would be great if the government were to guarantee care of the cows after they have finished producing milk, what will very likely happen is that these cows will be turned out on the streets, to join the already large population of stray bovines in India. Once there, they will end up eating plastic bags for lunch or starving to death anyway.

I am not even getting into all the other reasons why any animal loving Indian should shun milk: the hormones used to make the cows produce more milk, the painful machines the animals' udders are hooked up to in order to extract the milk, the filthy conditions the cows often are forced to live in, and the lack of medical or any care through their lifetimes. Here's an excellent piece from The Hindu newspaper. India's dairy production system looks a lot today like factory farms here in the United States. Gone are the days when your friendly neighborhood milk vendor would milk the one or two cows he kept in his backyard and treated like family. Most milk sold today in India comes of terrible cruelty. It's not enough to end the slaughter of cows-- it is time to stop consuming milk because it's just as cruel and just as deadly as any slaughter is.

The other, very good reason to avoid milk is, of course, your own health. Milk is packed with artery-clogging cholesterol and sugar, and although you will often hear people argue about the importance of calcium from dairy, there is really no evidence that the consumption of calcium from milk products helps strengthen your bones. You aren't a calf, are you? India and the United States, both large consumers of dairy products, have among the world's highest rates of osteoporosis and diabetes. In India, where dairy consumption is growing each year, researchers have found a new phenomenon: a rise in osteoporosis rates among young women.

On the other hand, calcium is abundantly available in vegan foods and in vegetables. If you look through the nutrition labels of most of the recipes I share here on Holy Cow!, you will know that you can get good quantities of calcium from most homemade vegan food. And that calcium is better absorbed by your body than the calcium in cow's milk is. Many vegan foods you can buy off the shelf are also fortified with calcium.

I have been veganizing Indian sweets over the years, and I am a little surprised myself that it took me a while to get to this, my most favorite of all Indian desserts, but as you will no doubt agree if you try these, they were worth the wait.

This Vegan Gulab Jamun is all that: it is spongy and soft and it soaks up all of that cardamom-y, sugar-syrup goodness into its very core. It is also really easy to make: your hands-on work is no more than 15 minutes, tops. The jamuns themselves need just two ingredients: bread and cashews. And the sugar syrup needs three: sugar, cardamom, and a squeeze of lemon juice. You do need oil for frying, and water, of course, but I'm not counting that one. Imagine so much deliciousness with just six ingredients. But you don't have to imagine -- try 'em! 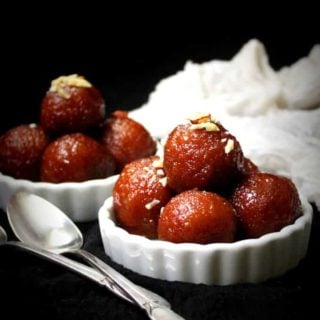 For the gulab jamuns: