Gajar ka Halwa must've been invented by a cook with a touch of genius. This simple but spectacular Indian dessert classic made with shredded carrots harnesses the natural flavor and sweetness of carrots into a dish so delicious, you'll be making it over and over.

As much as I love most vegan Indian sweets, I am particularly partial to Gajar ka Halwa, a thick and dry carrot pudding studded with nuts.

Part of the reason for this is the fact that it's made mostly with carrots, which means it is almost a healthy sweet -- an oxymoron if there ever was one. And yes, there's sugar here, but not as much sugar as you might think you'd need because the carrots, as they cook down, concentrate their own natural sugars.

What's more, if you really are on a health kick, you can make this recipe with dates, and cut out any added sugar altogether.

I had shared my Gajar ka Halwa with you all the way back in 2008 and it was quite perfect, but with Diwali knocking at the door, I wanted to refresh it for you because I've made some changes to make it even better over the years. For one, this is now a one-pot dish and it's still super easy to make, yet rich and delicious enough to enjoy on a special occasion. (You can also try my vegan carrot pudding, an equally delicious and naturally sweetened recipe that can double up both as breakfast and dessert)

I am not a big one for religious festivities of any kind, and most Indian festivals pass unnoticed by me, especially since I live far from India. But here's something I do love about India's religious holidays: I love that most Indians eat vegetarian on these days, because there's a tacit understanding that god would not want you eating his creatures on those special days.

But an exception, as it usually is with Indian vegetarian food, is milk and milk-based products, like ghee, which get used abundantly during holidays and festivities, and are a big part of Indian sweets eaten for Diwali or other occasions.

Gajar ka Halwa, too, is made with milk and khoya, a milk reduction. But for my vegan version I use cashew milk, which I make myself because I want the halwa to have a certain consistency and none of the preservatives.

The cashew milk is a great substitute for the milk and khoya, because it adds richness and sweetness and flavor. And there are many good reasons to shun milk, a product that comes from immense cruelty to cows.

In India, factory farming and its related abuses have taken firm hold, and as the country's thirst for milk grows, the animals who suffer most to quench it are dairy cows and buffaloes.

Cows and buffaloes used for milk live incredibly short lives -- just six to eight years. They are kept in a constant state of pregnancy to provide milk, and pumped with hormones and antibiotics. Calves are separated from their mothers early on -- sometimes right after birth -- so the milk he or she should be drinking can instead be used to feed humans. The male calves are slaughtered for their meat.

Ironically, India holds the title of the world's largest beef exporter, with the meat exported coming ostensibly from buffaloes (because cows are considered sacred!). Cows too old to produce milk are often turned out onto the streets and either starve or forage for food in garbage dumps, ending up with record numbers of plastic bags in their stomachs. There are said to be an estimated 60,000 homeless cows living on the streets of New Delhi, India's capital city, alone.

However you look at it, milk and milk products are bad news, and there's nothing sacred or holy about abusing an innocent animal and then leaving her to fend for herself on the streets where she will die anyway of eating plastic because there's no food available to fill her belly.

Veganism is slowly taking hold in India, and festivities are a great time to start a new tradition. Whether you are Indian or not, and whether you celebrate Diwali or not, I hope you will try this vegan Gajar ka Halwa. You won't miss the dairy, I promise. And your holiday will be a sweeter one for knowing you didn't contribute to the cruelty of milk.

Now that you're armed with all of my gajar ka halwa wisdom, let's move on and get cooking. And to all readers of Holy Cow!, a very happy Diwali. 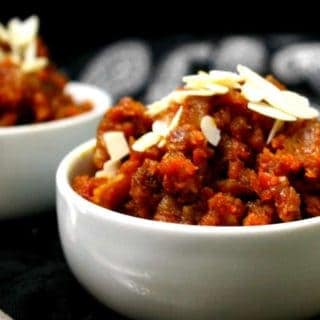