My vegan Carrot Almond Breakfast Pudding is sweetened with dates, and is healthy to boot. It has the intoxicating scent of cardamom, and it is a great way to begin any day. 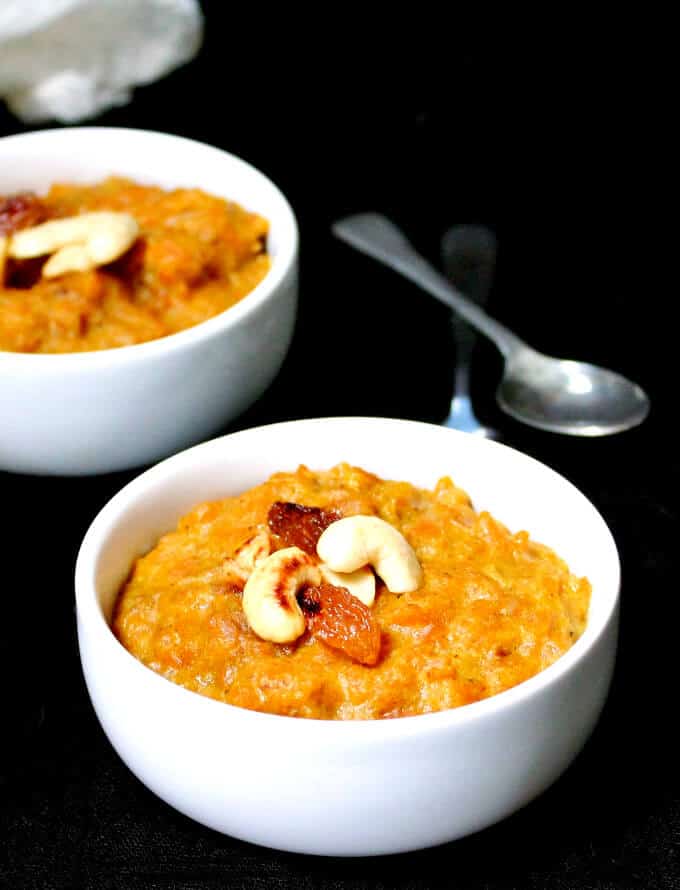 I have for you today a delicious recipe to make the weekend sparkle: my Vegan Carrot Almond Breakfast Pudding with natural sweeteners. It's healthy and delicious, all a the same time. 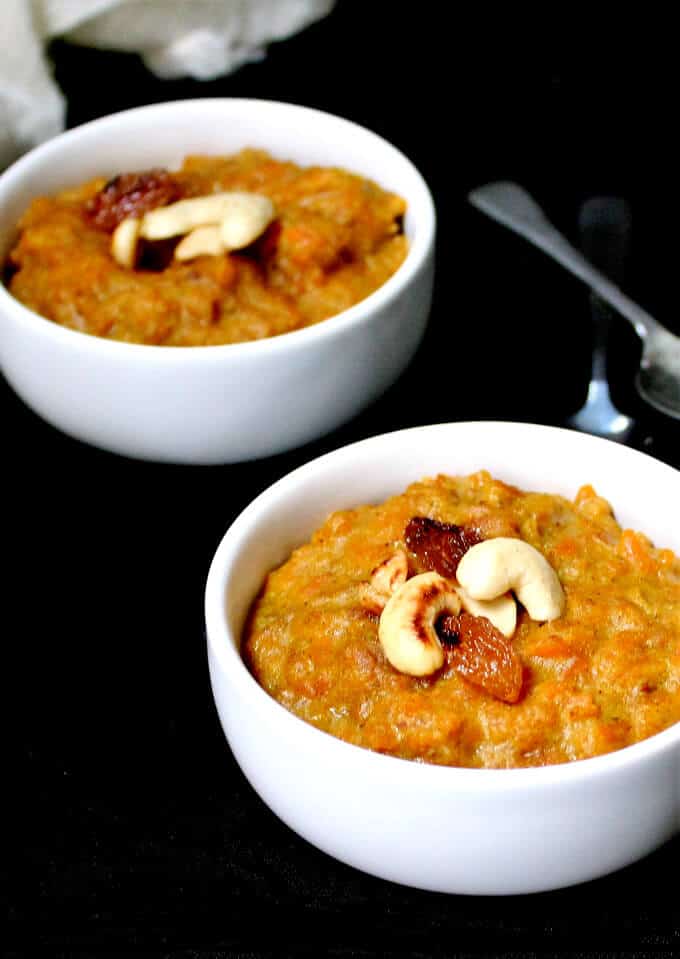 But first, this: These past few days, I saw an unusual uptick in visits to a very old post on this blog. The post has nothing to do with food. Rather, it's about Mahatma Gandhi, one of my heroes.

When I started getting messages on that post that said they had used the blog in a "letter," and one message asking for permission to use it, again in a "letter," I got curious. So I googled up the combination of keywords the searchers seemed to be coming from and it led me to a contest organized by the Indian Post Office to celebrate India's 70th anniversary of independence from British rule, on Aug. 15. The contest, open to people of all ages, asks the entrants to pen a letter to Mahatma Gandhi, titled "Dear Bapu, you inspire me." ("Bapu," meaning "father," is a sobriquet Gandhi is known by in India).

While I understand that people will turn to Google for help on just about every project these days, and it's amusing that people were actually telling me that they were using my post in their letters, I also found it disturbing that they would want to copy something so personal to me, for a letter that ought to be personal to them. If you are Indian, how difficult would it be for you to come up with reasons why Gandhi inspires you?

The irony of it all is that Gandhiji, for his entire life, preached the importance of truth and honesty, above all else.

But plagiarism, unfortunately, has become a fact of our lives, especially when the Internet makes it so easy. As a food blogger, I've dealt with every kind of plagiarism: Bloggers who are "inspired" by a recipe to come up with their own, but then, conveniently, forget to give credit. Bloggers who simply steal recipes and pass them off as their own. There are even "blogs" that lift your full post and put it on sites seeking to pull in advertising dollars.

Hearteningly, there are also bloggers who will write to me before they use a post in a blog or article, and link to it. I don't remember ever turning someone down when they asked for permission, and the gesture never fails to lift my spirits, because I know there are so many who won't go to the trouble of taking this small but meaningful step.

Here at Holy Cow! I follow a strict ethical rule: most recipes are my own, that I create in my kitchen. When I do sometimes use a recipe as a guideline, whether it's from a cookbook or a newspaper, I make sure I credit that source. The point of all this is not just that I don't want to steal intellectual property, which of course I don't, but because there is no room for dishonesty in this space that I've built so lovingly over the years. 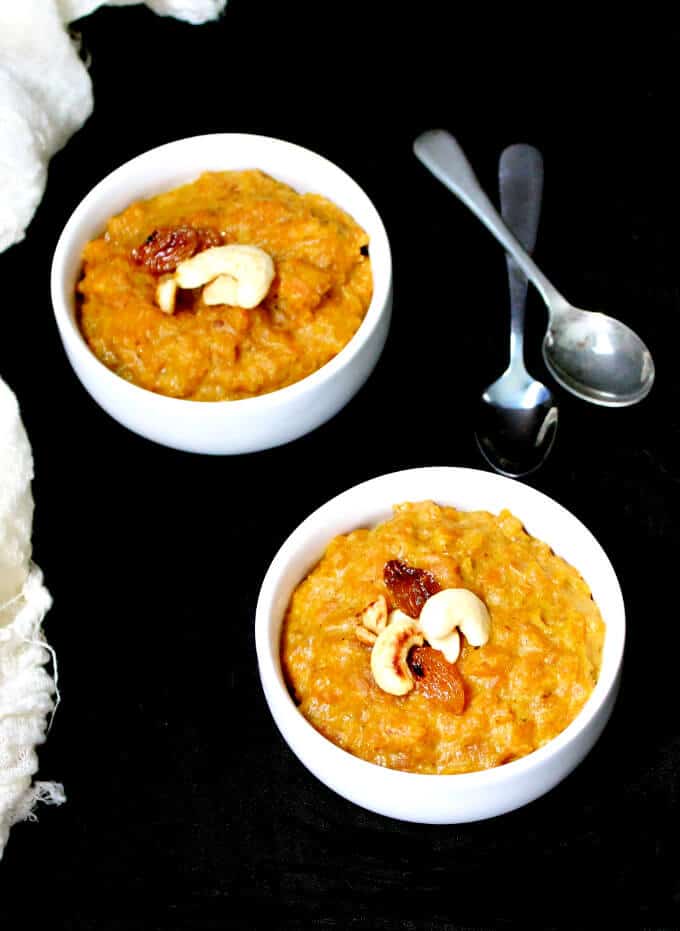 The pudding is inspired by that great Indian vegan sweet, Carrot Halwa or Gajar Halwa, but it is a healthy version that's nowhere near as rich but that tastes almost as decadent. Better still, it's like having dessert for breakfast!

I came up with this recipe while trying to empty the refrigerator of veggies in preparation for the new week. I had long been thinking of an Indian-inspired pudding for breakfast, and the carrots were a great way to add more healthfulness to the recipe.

Carrots are naturally sweet, so you really don't need any sugar here. The date puree I used was enough to add all the sweetness that was needed. You do need to cook the carrots down for some period of time, to make them lose their earthy flavor. But I have some tips for you on how to cut down on that time.

This recipe makes a small quantity. I had just three carrots on hand, and there was just enough pudding for the three of us. You don't need to eat a lot of this: it is quite filling, and a small serving will be more than enough to satisfy you.

Now for this delicious recipe for a vegan Carrot Almond Breakfast Pudding with natural sweeteners. 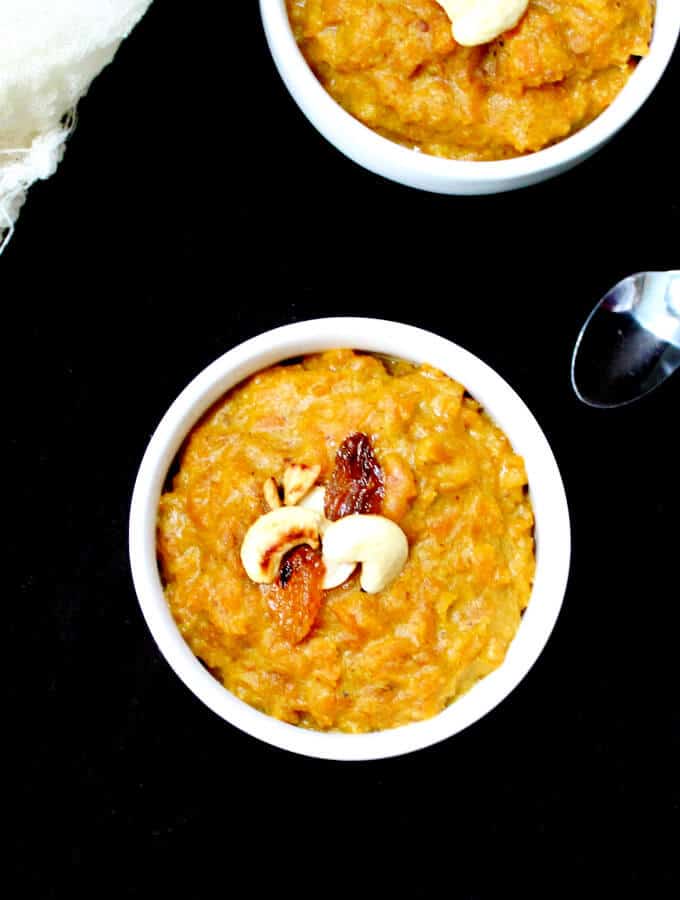 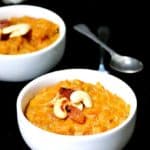