This vegan Bananas Foster Bread Pudding combines bananas, rum and brioche bread. It works great for breakfast or for dessert, or as dessert for breakfast.

I'm about to make your Sunday morning a sunnier one with this Vegan Bananas Foster Bread Pudding.

It's so delicious, it'll make you want to lick every last crumb from the bowl, and from the baking dish. Because it truly, honestly tastes like heaven. Or at least a piece of it. If you love banana bread, you will love this banana pudding for sure!

I used my Vegan Olive Oil Brioche to make this Vegan Bananas Foster Pudding and it was really the perfect bread for it. But if you want to make this dish lower fat, or fat-free -- because there's no added fat in this other than what's in the brioche, really -- you can use any tender bread. Wholegrain or gluten-free bread would work great too. Day-old bread is the best.

I made this for breakfast on Saturday morning and although it could easily serve six to eight people, it was almost gone by the time the three of us -- Desi, Jay and I -- were done with it. For Jay and Desi, my two resident kids, I served this with a dollop of vanilla ice cream, because that makes the deliciousness of this even more delicious. And even if that sentence didn't make any sense, trust me, this pudding absolutely will.

What I really love about this Vegan Bananas Foster Pudding is that you can make it with what you very probably already have in your kitchen: bread and bananas. Is there a home where those two aren't a staple? There's rum in this recipe, because it is a riff on the dessert Bananas Foster, and I don't mind feeding it to Jay because the alcohol cooks out leaving just a great flavor behind, but if you'd rather not, you can leave it out.

This has been a busy weekend for us so I am going to say au revoir now. Hope you enjoy the rest of the weekend! 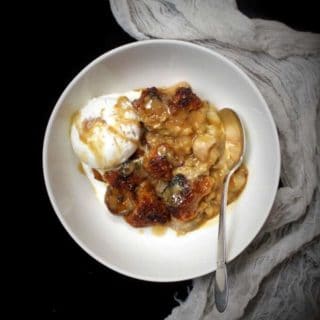 For the optional sauce:

Here's the recipe for my Vegan Olive Oil Brioche with Aquafaba. Works perfectly in this pudding. If you'd rather not add the sauce to the recipe-- and the pudding is delicious without it-- you can scatter on some golden raisins.