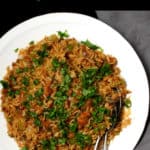 An easy vegan Dirty Rice recipe that you can cook up in under 30 minutes. There are no chicken livers in this meatless version of the Louisiana classic, but vegan sausage and Cajun seasoning -- along with a few other carefully chosen ingredients -- add all the flavor you can handle. A soy-free, gluten-free and nut-free recipe.

I've always loved cooking the food of Louisiana, probably because New Orleans starved me when I visited it for the first time almost a decade and a half ago.

It was just a month or two after Katrina and half the city was somnolent as it stirred and recovered from the storm. But the vibrance was still around, and at night you could feel it on the city's hallowed Bourbon Street.

Residents and tourists rubbed shoulders as they packed the famous rue in the French Quarter to celebrate life and rebirth and music.

Everyone was busy making and offering gumbo and chili, jambalaya and red beans and rice, and po'boys and muffulettas, and all those other foods Louisiana -- and New Orleans -- are known for. But no one, at least at that time, was making them without seafood or meat.

So while Desi tucked into pecan crusted catfish and soft shell crabs, I ate green salads (which I almost-hate) and Middle Eastern food (which I love, but not every day for every meal).

Because I abhor the idea of not being able to eat something -- albeit not more than the idea of eating an animal -- over the years, I learned to cook up flavorful vegan versions of these famous foods. I especially love (and so do many of you) recipes like vegan gumbo and vegan jambalaya. Today, I have for you another classic recipe from Louisiana, Dirty Rice.

Despite its rather odd name, Dirty Rice is a seriously tasty dish, and it's one that's also ridiculously easy to make. Huge bonus, it's utterly kid-friendly and, of course, available as a source of laughter at the dinner table (It's dirty, mom, and I like everything that's dirty).

The reason for that name, according to those who know more about the origins of Louisiana food than I do, is the fact that one of the ingredients in here in ground-up chicken livers, which give it a mud brown color.

Since we happily don't use chicken livers in a vegan kitchen, I had lots of other delicious options to add flavor to my Dirty Rice. In addition to the traditional ingredients -- the Louisiana "holy trinity" of onions, celery an bell peppers and rice -- I added in a dash of smoked paprika, a couple of dashes of liquid aminos (optional if you want to be soy-free) and a good amount of smoky sage.

For the sausage I used the Beyond Meat Italian sausage, which was really very good in here. But you can use any vegan sausage for an equally tasty result.

This dish comes together quite fast. You can cook the rice and the veggies simultaneously and all you need to do at the end is mix them together. It can all be done in under 30 minutes. Now that's a recipe to love, whether you're making it for a weeknight or a weekend. 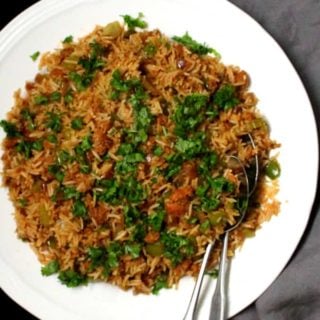 An easy vegan Dirty Rice recipe that you can cook up in under 30 minutes. There are no chicken livers in this meatless version of the Louisiana classic, but vegan sausage and Cajun seasoning -- along with a few other carefully chosen ingredients -- add all the flavor you can handle. A soy-free, gluten-free and nut-free recipe.
5 from 24 votes
Print Recipe Pin Recipe Review Recipe
Course: Main, Side Dish
Cuisine: nut-free, Soy-free
Diet: Gluten Free, Vegan, Vegetarian
Prep Time: 10 mins
Cook Time: 20 mins
Total Time: 30 mins
Servings: 6 servings
Calories: 340.46kcal
Author: Vaishali · Holy Cow! Vegan Recipes