This delicious, gluten-free vegan gumbo has no added fats, and it is packed with delicious beans, okra, mushrooms, thyme and sage. Serve the gumbo with brown rice for a tasty and healthy meal. A soy-free recipe.

One of the things I love about eating vegan is that I never have to be one of those people who has to rush at the last minute to buy milk or eggs because a storm is coming and the supermarket may not be open or accessible for days afterward. I don't have to worry about a power failure turning all that  meat in my freezer into an unsanitary nightmare. Give me some beans,  rice,  frozen veggies and soymilk -- all of which are usually already in my pantry -- and I'm all set.

And then, just to get a little edgier, I decided to make my homemade vegan gumbo fat-free. There seemed to be so much going in with all those different flavors -- beans, herbs, veggies-- that the fat just seemed totally redundant. I threw in some sage and chipotle for their smoky deliciousness, and I made the gumbo gluten-free by making the roux with brown rice flour instead of whole-wheat-- an idea that totally worked.

The recipe's really easy and comes together faster than you would imagine. I served it with some wholesome brown rice, but crusty bread or quinoa would go really well with this too. You can also serve it with my extra delicious vegan dirty rice, another Louisiana classic. 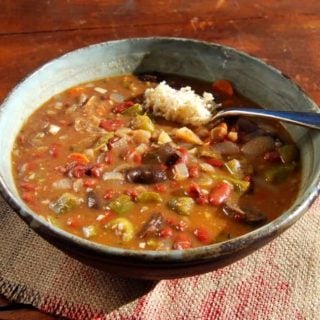