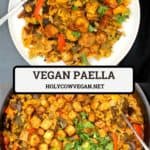 A fresh, flavorful Spanish vegan paella packed with veggies like leeks, onions, bell peppers, mushrooms and tomatoes, with tofu standing in for the seafood. It's a vibrant pop of nutrition and flavor, all in one dish--and it's one pot.

I have a thing for Paella, and can you blame me? There's something so, grrr, red blooded about Spanish food. And when it's a Vegan Paella, a one-pot package deal with so many goodies tucked in, one just can't help but fall in love.

Okay, I'd better rein myself in, but then again this Vegetable Paella is definitely a dish to get all hot and bothered about. It's delicious and there is so much goodness here from the rice and the lima beans and the red peppers and the tofu that your tastebuds will want to wear high heels and do the flamenco.

Paella is a popular dish around my home because, like I've told you before, Desi will eat rice in just about any form. And when the house smells as great as it does when I'm making this, he is definitely interested. More than. Better still, this is not just a perfect dinner but it makes for perfect brown-bag eats for both of us the next day.

I used some beans in my Vegan Paella which are traditional, especially in Valencia, the Spanish city where Paella originated, and other traditionally used ingredients, like onions and red peppers and sausage (vegan, of course).

But my recipe is also very simple and comes together rather quickly, because hey, I get it: we are not living in the 18th century where sultry senoritas could languidly saute and simmer and then serve it all up without a hair out of place.

I'm off to serve mine, and I can't believe I waited this long before wiping it off the face of the earth. And oh, if you're a parent, Jay loved this despite the mushrooms, so I'd put it in the kid-friendly box.

Tips and tricks for making the best vegan paella

What is the best rice to use for paella?

The most authentic varieties of rice to use for paella would be a shortgrain rice cultivated in Spain, like bomba rice or calasparra rice. You can easily find these online, but I used arborio rice, which I keep on hand for risottos and makes a perfectly acceptable replacement.

Do I need a paella pan to make a paella?

Not at all. While paella pans can be found easily here in the United States, and some are reasonably priced, I am a big believer in using what you already have in your kitchen and making it work. For the paella, I use my biggest, widest skillet and it works perfectly. Just don't use a pot with high sides and make sure the skillet is big enough to hold all the veggies, rice and liquid.

Socarrat is the layer of "scorched," caramelized rice at the bottom of the pan that gets brown and crispy and adds a unique flavor dimension all its own. This is a technique also used in other global cuisines that eat rice abundantly, including Persian, Chinese and Latin American.
To create a soccarat in your paella, cook the paella on a high flame in the last five or 10 minutes, but keep your nose engaged to ensure it doesn't burn. 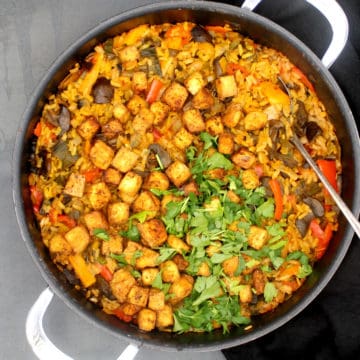 For the "seafood" tofu

For the paella rice