Arroz con Pollo is a popular Spanish/Latin American one-pot dish of chicken and rice flavored with bell peppers, onions, saffron and, sometimes, olives. My vegan version takes a pass on the pollo, but is just as flavorful and even more wholesome. A vegan, nut-free and gluten-free recipe.

A rice dish I sometimes made in my pre-vegan days was Arroz con Pollo, a deliciously flavored Spanish/Latin American one-pot dish of chicken and rice. Desi loved it immensely, so after becoming a vegan all those years ago, I found a way to make a meatless version that was just as flavorful but more wholesome.

Now, my Arroz sin Pollo has another fan--Jay, who will eat it and ask for seconds, and thirds. It's just that good.

This is an easy recipe to make--foolproof even--and it's one-pot, so its great for a weeknight or for a quick but special weekend meal.

What chicken substitute works best in this recipe?

I used part of a vegan chicken loaf made with seitan, like the ones sold for Thanksgiving, that I had in the freezer, cut into 1-inch cubes. I've also used tofu or tempeh and other chicken substitutes in the past. Adding one of these would also make the dish gluten-free, if that's what you want.
Beans--pinto or white--would work too.

A long-grain rice, like basmati or jasmine, works great. The grains hold their shape after cooking (if you follow instructions) and give the dish a really pretty look.

Most recipes use bell peppers, and I used two in my recipe to make it extra colorful--red and green. You can use any other color of bell pepper.
Although not traditional, you could also use carrots or zucchini.
Olives are great in this dish, and I often add them, although I didn't have any this time so I left them out. Instead I added capers, which work really well too.
There are onions too here, and tomato paste, making this a really wholesome dish.

Thyme and oregano are good and necessary. I use a combination of fresh and dry herbs. The dry herbs are good for coating the meat substitute before you brown it in the pan, and fresh works great for adding to the rice. But if you only have one or the other, that's fine.

I also throw in some sage because it adds great smoky flavor. When you veganize a dish, you really want to add in as many layers of complimentary flavor as you can, and the sage really helps.
Garnish the dish with parsley or with sprigs of thyme and/or oregano.

Can be Gluten-Free | Nut-Free 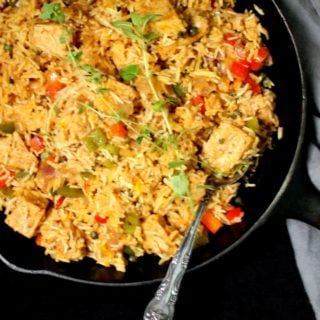