Love or hate eggplant, I've never met anyone who could resist a Baingan Bharta. This north Indian dish of fire-roasted eggplant mashed and cooked with tomatoes and onions is an Indian restaurant favorite, and it's versatile enough to enhance nearly any meal, especially a simple Indian dinner of dal and rice. A vegan, soy-free, nut-free and gluten-free recipe.

I cannot figure out people who detest eggplant, although I've met many, including vegans who will chow down any other vegetable without complaining.

But the mere mention of eggplant will result in grimaces and shrugs and even an emphatic, I hate it!

The reason for this unbridled dislike, I think, could only be that these people have never eaten eggplant that's cooked correctly.

Sure, it's hard for someone not familiar with this veggie to know just what to do with it. It even has multiple names that make your head spin--- brinjal, anyone, or aubergine? And when you actually have to cook one should you peel that skin or leave it on? And how do you get that spongy flesh, so acridly bitter, to taste good or at least palatable?

The answer is simpler than you may think: cook that eggplant, skin and all. Thoroughly. And flavor it wholeheartedly.

Eggplant is not a veggie meant to be eaten partially cooked or mildly flavored. But when you cook it all the way and smother it with complementary flavors, it transforms into the most delicious food. That flesh gets melt-in-the-mouth tender and creamy and even sweet, and it absorbs all the great flavors of the other ingredients.

Now, if you eat it, you'll be deeply, madly, irrevocably in love.

If you want to open up your mind -- and tastebuds -- to this extra-special veggie, try looking to cusines that love it for some inspiration. Roast and mash an Italian eggplant into a tomato-onion sauce for this Baingan Bharta. Serve the smaller, tender varieties smothered in spices and coconuts in this Sri Lankan Eggplant Curry. Or roast one and blitz it with chickpeas and za'atar for a divine Eggplant Hummus.

Make friends with eggplants and, you'll find, they are a magical thing.

What we love about this Baingan Bharta

What do you serve Baingan Bharta with?

Making this recipe with the tomato-onion masala sauce

If you already have a jar of my Tomato Onion Masala Sauce handy, lucky you. You will need to roast your eggplant and scoop out the flesh and then chop it up. Next, heat the oil, add the cumin, and then add the tomato onion sauce to the saucepan. Heat it through, add the chopped eggplant, and mix. Garnish with cilantro. Simple. 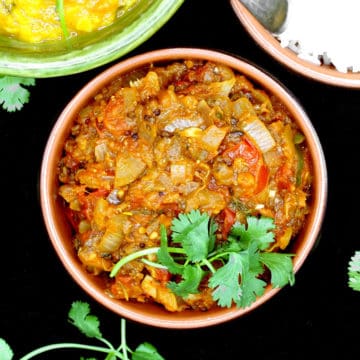