Jump to Recipe Pin Recipe
Baghare Baingan, a dish from the south Indian state of Andhra Pradesh, is a delicious preparation of tiny round eggplants stuffed with a spicy peanut, coconut and tamarind paste. It is perfect with rice and dal, or with rotis.

I gave up cooking with non-stick pots and pans a long time ago. I am a gal who likes stuff to be low-maintenance and safe, and non-stick pans, it seemed, were neither. You had to be ultra-cautious in cleaning them, and if you got a scrape, heaven forbid, unwanted chemicals could leach into your food.

But non-stick pans do, of course, serve a valuable purpose: you need less oil to cook your food which is important in our health-aware world. And some foods, like a stir-fry, for instance, are better off cooked in non-stick pans. Of course, I never cooked in a non-stick pan that was 100 percent non-stick, but that's another story.

Anyway, when I decided to give up non-stick pans, I was in a dilemma. My sturdy stainless steel pots and pans were good enough for most every day cooking, but with low-fat stir-frys, for instance, I did feel the need for a surface that was slicker and more forgiving.

That's when I read a newspaper article on cast-iron pans. This was almost a decade ago, but that article so impressed me, I still have it -- yellowed and fraying-- in my kitchen cabinet. I prize it not so much for the information any more, which I have almost by heart, but for the fact that it marked a significant milestone in my kitchen routine.

In India, tavas, or flat griddles used to bake chapatis and such, are usually made with cast iron. But until I read this article, that was the extent of my knowledge about cooking with cast iron.

When seasoned, the article said, cast-iron pans made great non-stick pans one could fry, saute, stir-fry and cook just about anything in.

So the next time I went to the market, I picked myself a 12 inch cast-iron skillet.

It was metallic-gray and was a steal compared to most good-quality non-stick pans. The article had details on seasoning the pan, which sounded really strange and really odd to someone who had never done anything like it before, but I gave it a go.

Then, I tried cooking in my cast-iron pan. It was a disaster.

Everything stuck to it, didn't come off, and tasted funny. Still, I wasn't about to give up. One of the most magical things about cast-iron pans is, they are supposed to improve with use. And so I continued to season my pan and used it only to do oily stuff like deep-fry at the beginning. Gradually, my cast-iron pan began to get that prized black, shiny hue and smooth texture that turns it into a naturally non-stick pan.

Now, I have an assortment of cast-iron pans in all shapes and sizes (except a dutch oven. Desi, are you reading?), and I use them all the time for everything from making pancakes to curries to veggies and, of course, to deep-fry.

I couldn't be happier. They look great, clean easily (forget all those stories about never washing your cast-iron pan. I do it all the time, sometimes even with soap, and it's never hurt them), and they are supposed to add iron to your food which is great when you are a vegan like me. You do need to take some precautions, like not putting them away when wet (I usually just put mine on the stove after washing and wiping to make sure all the moisture is gone), and you also need to season them a little more frequently when they are new.

This ode to cast-iron pans was just the precursor to this delicious stuffed-eggplant dish that I wanted to share with you, and which I cooked, surprise, in a cast-iron skillet.

Baghare Baingan is a dish from Andhra Pradesh, in South India. It's very close to Bharleli Vangi, or Bharli Vangi, which is a dish I often ate growing up at the home of Maharashtrian relatives, but has some differences that make it quite unique.

This dish typically uses a lot of oil, but I cut it down quite a bit. You do need the small, round Indian eggplants for this, usually available in Indian grocery stores if you happen to live outside India. These smaller eggplants have a more delicate flesh and skin, and they are the perfect size for stuffing. 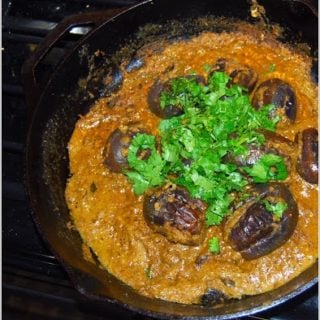