Marathi-style Bharli Vangi is a much-loved delicacy in western India. Small, round eggplants are stuffed with a spicy coconut-peanut mixture. Serve with rice and dal for the perfect Indian meal.

Last week, browsing through a small but lively farmer's market in Northwest DC with my friend Roshani, I came across some gorgeous little round eggplants: the kind we Maharashtrians use to make Bharli Vangi, or stuffed eggplants.

This is my favorite way to eat eggplants-- and Desi's too. This time I cooked the eggplants in a pressure cooker. This is a technique often used to cook Bharli Vangi and I am not taking credit for devising it, but it's not one I had ever used: instead, I always liked roasting my eggplant in a saucepan on the stovetop so it got a little charred on the outside.

But the pressure-cooker method is less work, frankly, because you don't have to watch and turn the eggplants every few minutes: instead, you can just put everything in and let it all cook by itself. The resulting eggplant, although it doesn't have the slight char that I love, makes up by being absolutely butter-soft, melt-in-the-mouth delicious.

My recipe varies a bit from the traditonal: I use coconut milk instead of shredded coconut because it helps hold the stuffing together. This can also be a healthy substitution because many cooks use oil to keep the stuffing together. I also add some fenugreek seeds because their pleasant bitterness help balance out the sweetness of the jaggery and the spice of the chillies.

Here's the recipe-- it's great with rotis, or with some vegan curd-rice. Enjoy, all! 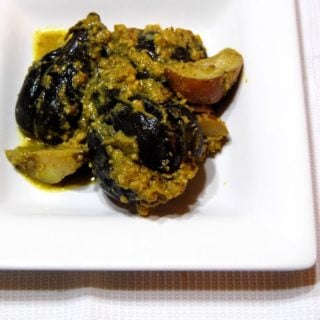 For the stuffing masala