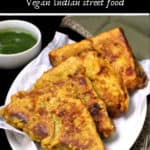 Love vegetable pakora? Take your tastebuds to a different level of deliciousness with a tasty, crunchy Bread Pakora -- Indian street food at its delightful best. It is exactly what it sounds like -- bread stuffed with a chatpata (zesty) mixture of potatoes and chutneys, then dunked in a pakora batter and fried to golden, melt-in-the-mouth crispyness. It's a party for your mouth.

As flavorful as Indian food is, even more flavorful, if possible, is that wild smorgasbord collectively known as Indian street food.

Part of the appeal of street food lies in the fact that it is so badass, with an aura of unhygienic unhealthiness that -- instead of sending the eater running a mile off -- makes him or her crave it almost as if it were the proverbial forbidden fruit.

Mom always told you not to eat it because you never knew where the vendor's hands had been, and you could see -- although you might have preferred to turn the blind eye -- that the dishes were all being washed all day by being dunked into that same bucket of water standing by the vendor's knee (although disposable styrofoam plates and glasses have replaced those ceramic ones now, creating a whole new environmental conundrum).

But no matter how heavily the ozone hole weighs on your conscience, or how badly you want to fit into those jeans that have been hanging in your closet, untouched, for the last 10 years (I'm not even going to think about the vendor's hands here), street food is impossible to resist. Because under its renegade reputation is deliciousness such as you cannot find in any haute restaurant meal and not even in mom's cooking.

This is a mishmash of some of the boldest flavors and textures you can imagine. It usually starts out with a rather healthy base of veggies or sprouts or chickpea flour or puffed rice crispies. In go lots of spices or chutneys-- still good. And finally, in a fell swoop, all of that healthiness is either dunked into boiling oil, or it is smothered in more deep-fried stuff -- a step that transforms food that's good into food that's sublime.

This Bread Pakora or Bread Pakoda, which I have for you today, is a perfect example of Indian street food at its best, because it encompasses all of the above. It's not Paula-Deen-level unhealthy but you can be pretty sure Gwyneth Paltrow isn't going to be putting it on her meal plan any time soon. At least not openly. 😉

There are all kinds of bread pakoras on India's streets, most vegetarian, although you'll find some versions with chicken stuffed inside them. The vegetarian versions often contain paneer, an Indian cheese. But who needs meat or cheese when you can eat potatoes?

This is a pretty easy recipe to make, like most street food is. You start out with bread -- usually white, although I used white whole wheat for a few health points -- and potatoes. Neither is necessarily bad, at least not for someone who isn't afraid of carbs.

In go a couple of zingy chutneys -- a green, herby one and a sweet-tangy-spicy tamarind-date one -- and then all of it is dunked in a traditional pakora batter made primarily of chickpea flour or besan. The whole darn thing is then deep-fried, although I rather shallow-fry it in a quarter-inch or so of oil. If you do it at the right temperature, your bread pakora will not be greasy at all. In fact, it will be fluffy and crunchy, as it should be.

Do I have to fry the bread pakora? Can I bake it or air-fry it?

You certainly can, and it would be delicious, but it won't be as crispy as the fried version. In the oven, coat the baking sheet with oil, place the pakoras in a single layer, spray on more oil, and bake in a preheated 375 degree oven for 30 minutes, flipping over halfway through.

Can I make the bread pakora without the stuffing?

You can, and in fact the version of this my parents sometimes made at home did not have a stuffing. Just coat the bread with the pakora and fry. You can add more spices to the pakora batter if you're not using a stuffing, like crushed cumin seeds.

How long will these bread pakoras keep?

You should preferably eat them rightaway because the longer they stand, the pakora will lose some of their crunch. If you want to divide the recipe over several meals, get all of the ingredients ready and then put the pakora together, stuffing and dunking and frying and all, just before serving.
If you do end up making them in advance, warm them in an oven before serving. 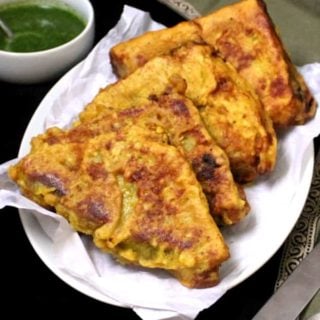 For the green chutney: