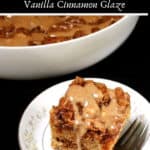 If you dream of eating dessert for breakfast, this vegan Cinnamon Cake is going to make you smile. It's got a delicious layer of cinnamon sugar swirled between two layers of fluffy, moist cake. On top goes a yummy cinnamon streusel topping. And if all that isn't enough, there's a cinnamon vanilla glaze drizzled over the top. Vegan, soy-free recipe. Can be whole wheat.

If you're looking to feed an army for breakfast -- or dessert -- or just yourself, you want to make this scrumptious Vegan Cinnamon Cake with a Cinnamon Streusel Topping and a Cinnamon Vanilla Glaze.

I know that's a mouthful, but isn't it a delicious one?

My son, Jay, loves my vegan cinnamon rolls and would have them everyday if he could. It was for him that I came up with this recipe. It's really like a cinnamon roll cake, and it's less work for me. And while it's probably too decadent for breakfast everyday, it works just beautifully for a weekend breakfast or for dessert.

The nice thing about this cake is that it is super easy to make and you don't have to worry about unmolding it and then frosting it, etc. -- the part about cake-making that is sometimes the most unnerving and intimidating. Instead, just bake up the cake in a big -- and, if possible, pretty -- pan, and you can serve it right from the pan.

How to make the perfect vegan cinnamon cake

Even if you're not a seasoned cake-maker, there is no better recipe to start out with, and very little chance of messing it up if you follow instructions closely. Some of the things to keep in mind when you bake this cinnamon cake or any cake are:

Can I make this cake ahead and freeze it?

Yes, you certainly can. Make sure it's tightly wrapped and in an airtight container. I'd advise waiting to pour on the glaze before serving.

In the refrigerator, the cake will last for a week, although if your family is anything like mine, it probably won't. 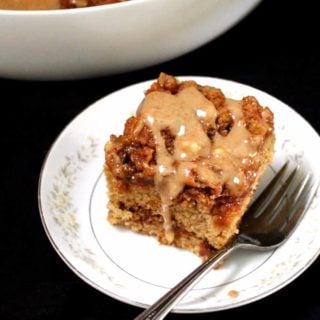 For the cinnamon filling:

For the cinnamon streusel:

For the cinnamon vanilla glaze: