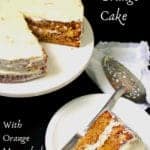 This vegan orange cake is a marvelous treat. It is crammed with vibrant orange flavor in every bite and on top goes a yummy orange marmalade frosting. The recipe is soy-free and nut-free and you need just one bowl and 10 ingredients to make it. You can be sure it is the best vegan orange cake you will ever eat!

Citrus is a marvelous flavor for cakes, and one I never can get enough of. This vegan Orange Cake is a dessert I've baked over and over for many years, after first finding the recipe in the Joy of Cooking. Over the years I've made some tweaks and, most importantly, I've multiplied its deliciousness by doubling the recipe and slathering it with a fluffy, decadent orange marmalade buttercream frosting.

This is a delicious cake, full of orange flavor in every bite. It has a tender crumb that's perfectly but not cloyingly sweet, and the marmalade buttercream is soft and fluffy and to die for.

It is also a rather easy cake to make: it should take you no more than 10 minutes to throw the ingredients together and perhaps another 10 to whip up the frosting, if that. It's also a one-bowl recipe because you can throw all your ingredients for the cake in one by one, and then rinse out the bowl and use it to whip up your frosting. And best of all, you can even make your cake a tad boozy, as I sometimes do (but not this time), by subbing a couple of tablespoons of the orange juice with an orange liqueur.

How to make the best Vegan Orange Cake recipe

How to make the Orange Marmalade Buttercream Frosting

I hope you'll try and enjoy this amazing Vegan Orange Cake with Orange Marmalade Buttercream Frosting as much as we did. If you make it, be sure to let me know in the comments below or take a photo and tag me @holycowvegan on Instagram!

Can I make this cake without the frosting?

The cake is delicious without the frosting and you can definitely serve it plain. Sift some confectioners' sugar on top for a pretty look.

Can I substitute the butter with extra virgin olive oil?

Using just olive oil would overwhelm the orange flavor of this cake. I recommend using vegan butter in this recipe, but if you want to use oil preferably use an unflavored vegetable oil, like avocado oil. At best you can substitute half the butter with extra virgin olive oil.

How long can I store this vegan orange cake? 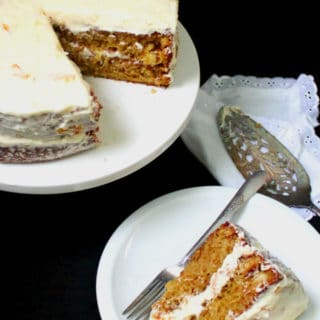 For the vegan Orange Cake: