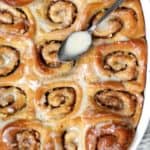 The best vegan cinnamon rolls recipe! These buns are soft, warm and fluffy with addictive notes of cinnamon and vanilla, and they are quite foolproof -- easy, in fact. The heavenly aroma as you bake these will bring everyone rushing to the breakfast table!

When I first arrived in the United States, more than two decades ago, it was almost impossible for me to leave a mall without first digging into a cinnabon.

I knew I was not doing my waistline any favors, but honestly, can anyone resist that aroma?

After going vegan I began experimenting with the perfect cinnamon roll recipe, and I found it! This recipe is not just delicious and as good as anything you can buy at a restaurant (or in a strategically placed food court at your local mall), it is better. And what's even more amazing is that it's a super easy recipe you can put together with just a few minutes of hands on work.

Just like those cinnabons, these cinnamon rolls pull you in from the moment that aroma of cinnamon and sugar baking inside a pillowy bun hits the air. I can't think of anything better.

Except, of course, the experience of actually biting into one of these gorgeous beauties.

The easy cinnamon rolls are topped by a delicious vanilla cashew cream glaze that'll leave you licking your fingers. And they're healthier than you think, with olive oil instead of shortening or vegan butter.

What leavening do you use in these rolls?

I like to make my cinnamon rolls with yeast because they taste the best this way. I often see recipes for vegan cinnamon buns that take under an hour or are made with baking powder, I remain committed to doing this the proper way because I wouldn't trade the perfection of these for an extra hour. Honestly, would you rather have something great, or something that's just okay?

How long do they need to rise?

The dough will need a one-hour rise and you will need to let the rolls rise for another 45 minutes to an hour after forming them and before putting them in the oven. Altogether, factor a total of three hours for making these rolls, from start to finish.

Can I begin these the previous night for breakfast tomorrow?

Yes! If you want to bake these up for breakfast, prep the dough the night before and let it rise in the refrigerator. That way you'll just need another one-hour rise in the morning and you can bake up your rolls in time to wake everyone up with that amazing cinnamon aroma.

Why do you need aquafaba in the recipe?

The aquafaba replaces the eggs, and I've had great success with making baked goods using it, like my vegan brioche doughnuts, vegan challah and vegan brioche. It helps makes these rolls even softer and more pillowy, but if you don't want to use it, leave it out and you'll still get a delicious result.

Why is there no salt in these rolls?

You don't really need any added salt in this recipe because the aquafaba itself, especially if you use storebought, is already salted, and while you want a soupcon of salt in your baked sweet goods, you don't want to overwhelm them. If you don't use aquafaba, add another ¼ teaspoon of salt to this recipe.

I would be amiss if I didn't tell you that Jay absolutely went bonkers for these cinnamon rolls. He wanted to eat them all at one sitting. But, sadly for him, so did I. 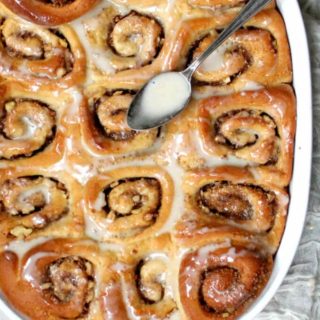 For the vanilla cashew cream glaze: