I am not a big believer in the supernatural but there was this one time, on a cold, dark February evening, when my rooted-in-reality self turned a wee bit agnostic.

I was walking out of the Maryland statehouse in Annapolis. The legislative session was on and getting longer by the day with delegates and senators racing against the clock to pass crucial bills. I had just finished filing my story for the next day's newspaper from my desk in the bullpen -- a busy room in the statehouse basement where political reporters from almost every media outlet in the state congregated during the session.

It was nearly eight and I hurried to make it to the bus stop around the corner, in time for the last shuttle to the parking lot. An unusually gusty, strong wind whistled and stirred up the rust-gold leaves on the cobbled brick pathway as I walked past the grand, wide marble steps leading up to the first floor of the state capitol.

The Annapolis statehouse is surely one of the most breathtaking state capitols in the country, with a tall, distinctive, white dome capped by black shingles. On the left, behind a black, wrought-iron fence, is the governor's mansion with its red-brick exterior and wide, white wood trim. Behind the statehouse, separated by charming, centuries-old homes, is the Chesapeake Bay Harbor edged with hundreds of boats bobbing in their slips. And up front, across a brick mall with a statue of the United States' first black Supreme Court justice Thurgood Marshall, are the House and Senate buildings.

The walk from the statehouse to the shuttle stop was not a long one and usually there would always be a guard or two and a couple of government aides or reporters walking around. But that night I was quite, quite alone.

As I walked, going over the day's story in my mind again and again as I always did, I heard a strong set of footsteps behind me. Happy about getting some company but still walking, I turned to look behind. Almost at that instant the footsteps stopped. There was no one there.

Sure I had made a mistake but feeling a little spooked nonetheless, I picked up my pace. Again, the footsteps. I looked and again there was no one. Not a soul.

I saw the shuttle coming in round the corner and ran to get it and that was the end of that episode. I never again had that spooky feeling walking out of the statehouse, nor did I then or ever again see anything.

Months later, when I was no longer working in Annapolis, I read about the ghost of the Maryland statehouse. A man named Thomas had slipped and fallen to his death more than 200 years ago while working on the dome. His widow and children were not compensated for his death, and a disgruntled Thomas has apparently made his displeasure about the state's meanness known ever since by slamming doors and making lights flicker in the statehouse, among other shenanigans.

Can't say I blame him for wanting to get even with those politicians. But why on earth was he trying to spook me? 🙂

Whether you believe in ghosts or not, you surely have to love Halloweeen, that incredible time of year when little ghouls, fairies, cowboys, princesses, superheroes and what have you come knocking on your door for candy. In my neighborhood we have Halloween enthusiasts ranging from those who drape their porch and front yard with floating white ghosts, cackling witches, headstones, and corpses rising out of the grave, to those who put out a jack-o-lantern or two, or a round, rotund pumpkin.

But the commercialization of festivals does bother me. When I once wondered if I could just make treats for those little trick-or-treaters instead of buying candy, a friend warned me that parents might not be comfortable with kids getting homemade treats because they could contain ingredients they could be allergic to. Which was perfectly understandable, and we do get a lot of kids who we don't know or barely know coming to the door on Halloween.

But this year, at least for the kids we do know, I thought I'd make these cute little itty bitty cupcake bites. The chocolate cupcake comes from my own Vegan Chocolate Cupcakes with Chocolate Buttercream which really is the world's best. For the icing I used cream cheese and vegan Earth Balance "butter" sticks and some food coloring for that vibrant, orange, Halloween-y color. On top I sprikled some green sugar-- again, just plain vegan cane sugar mixed with some green food coloring. What's not to love?

So here you go, with the recipe. Enjoy, all. And if you are in the mood for another scary story, go read my completely fictional The Ghost and the Banyan Tree. Or better still, share your own encounter with the supernatural in the comments section. 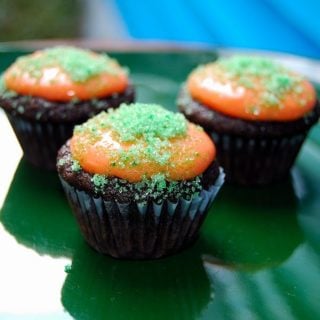 For the green sugar