Gujarat is a beautiful swath of land not unlike an alligator's head that sweeps into the Arabian Sea and kisses Pakistan's southeast border.

This is the state where India's most illustrious son, Mahatma Gandhi, was born. A land that was once the playground of Krishna, the charismatic child-god and friend of cows whose antics cram the pages of India's holy and mythological books. The state that is home to the Jain community, a religious group who have -- for centuries and long before the term "ethical vegan" was coined--believed in shunning cruelty to every living creature, including insects.

This is also land of incredible beauty, with beaches that stretch forever, ancient temples that glitter under clear, moonlit skies, and an abundant wildlife that includes solemnly majestic tigers, lightning-fast leopards, and bone-lazy sloth bears. The Rann of Kutch, the exquisitely mysterious gulf that lies between the two alligator jaws, is a bird-watcher's paradise with raptors, bustards, cranes and hundreds more bird species.

As a teen, I had a chance to travel around Gujarat, thanks to my cousin Deepa who fell in love with and married a Gujarati. Raju Bhai's family was from Surat, but at the time of their wedding he was living in Mithapur, a small, neat city created by the Tatas, one of India's biggest industrial families. Mithapur literally translates to "Salt City," and that's what it was-- it was where Tata Salt was manufactured and packed and shipped off to grocery stores around the country.

I often traveled to Deepa's home with her mother, my dad's sister, who lived in Bombay. More often than not, we'd take off for side trips. To Surat, a buzzing city that looked like Bombay on a smaller scale. To Dwarka, the place where Krishna is said to have lived, and which was a major attraction for my deeply religious aunt. To Okha, a port city at the very tip of the state, right where the gulf swims out to the sea.

There's one more thing that make Gujarat special: its food. Gujarati cuisine is rich in vegetarian dishes and chickpea-based snacks, each unique, many extremely healthy. One of these healthy and uber-special snacks is dhokla, a pillow-soft, savory delicacy made with rice and lentils and then steamed. On top goes a tadka of spicy brown mustard seeds sputtered in oil, and lemony-bright coriander leaves. Imagine.

I wanted a really special, very authentic dhokla recipe to share with you rather than many quick versions around the web made with chickpea flour. I turned to my friend, Roshani, whose family moved here from Gujarat when Roshani was just a little girl. Her mom, who lives in Houston, immediately sent me two recipes for dhokla-- one for the more ubiquitous yellow version, made with chana dal or bengal gram dal, and the other a white version made with udad dal or black gram dal.I made the white version and, to make it healthier, I replaced half the rice in the recipe with brown rice. The dhokla was delicious, and neither Desi nor I could have enough of it.

Keep in mind that this recipe makes a ton of dhokla, so halve it if you are just making it for one or two people. I steamed the dhokla in a round baking dish that fitted into my pressure cooker base, but if you have an idli mold you can use that too, although you will of course end up with idli-shaped dhokla rather than little square pieces.

Thanks Roshani and mom, for a great recipe. 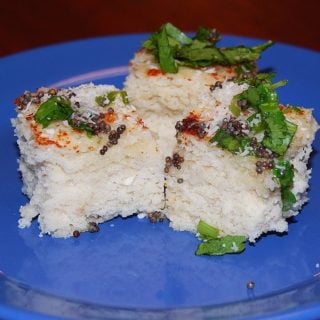