Chavde or manday are a lacy, crispy, cardamom-scented sweet made in western Indian homes, especially for Diwali. This delicious sweet is divinely vegan and even fun to make!

I have a real weakness for crispy sweets. And at the top of my list is an exquisite, lacy, sesame-seed-and-cardamom-sprinkled delicacy that's perhaps not very well-known outside Maharashtrian and Konkani homes: Chavde, or Mande.

In my childhood home, sweet-making was a joint endeavor between my parents and I can still see them as they made Chavde together. Mom rolled out the wafer-thin discs of dough and dunked them in frothing oil, Dad sprinkled them with a scented, sugary mixture, then folded them rapidly before they had a chance to cool down-- a job that required asbestos fingers.

As the chavde cooled, they would -- like magic-- set into a crackling, crispy, delicious but not cloyingly sweet snack.

Chavde are popular eats at Ganesh Chaturthi, India's celebration of the elephant-headed god's birthday which falls-- today! Chaturthi is always celebrated with plenty of food, a lot of it sweet, including the wonderful Modak. I have written before about my love for this colorful, raucously vibrant festival that sometimes lasts as long as 20 days, so I'll spare you a repetition.

Instead, I'll leave you with a recipe that's not only delicious but also completely vegan and therefore -- as I like to say -- one no God could resist. Even better, it's one that you can make in under an hour, honest. The only skill you need is an ability to roll out the dough into a thin disc. And don't even worry about making it perfectly round because once it's all folded up, who'll be the wiser? 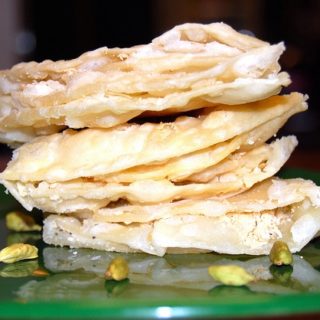