A rabri is a divine Indian dessert made by heating milk until a good deal of the liquid has evaporated, leaving behind a thick, creamy pudding that's sweetened and flavored with cardamom and saffron. My vegan rabri has no dairy, couldn't be easier to make, and is as delicious as the dairy-based version--probably more.

A rabri (pronounced rabdi), used to be one of the highlights (for me) of any wedding meal when I was growing up in India.

This thick, milky pudding, called a basundi where I come from, is simply a reduction of milk flavored with cardamom. Yet it's so divinely tasty, it's genius.

I've long wanted to make a vegan version of this dish with no compromises and with Diwali so near, there wasn't a better time to try.

My vegan rabri is so delicious, you will never look back.

There is no good reason to cling to the belief that Indian sweets need to rely heavily on dairy products. Cows are worshipped by Hindus, and yet they are also terribly abused on factory farms and tabelas for their dairy--it's a paradox no one who genuinely believes in vegetarianism as a path to god should tolerate. India's dairy habit also makes it one of the world's most diabetic nations, and the belief that consuming dairy products like milk and ghee makes one healthier or more spiritual is pure, utter rubbish.

There's no better time to start making a change than during Diwali, the mother of all Indian festivals. Follow along to learn how to make a vegan rabri, and come back and tell me all about it!

How can you possibly substitute milk in rabri?

Quite easily, with cashew milk.

Cashew milk has the right consistency and creaminess for a rabri recipe, and it also doesn't need nearly as much time as milk to reduce, because the cashew acts as a thickener.

For best results, make your cashew milk at home by soaking the raw cashews for several hours in almond milk. This makes the cashew milk extra smooth and gives you the best results. Storebought cashew milks have additives that will not give you the pure flavor you want here.

Some add khoya, a reduction of milk, to the rabri, and the khoya floats in the pool of creamy milk, creating little chunks of deliciousness. To emulate the khoya, I use almond flour, which has pretty much the same effect.

A rabri is usually flavored with cardamom and saffron, which add all of that amazing flavor. I add one more thing--pure vanilla extract. This adds that hint of je ne sais quoi, pushing this vegan rabri into sublime territory. You can also add a splash of edible rose water or kewra water, a floral extract, for more richness.

Garnish the rabri with nuts like pistachios, cashews, blanched almonds, and a few strands of saffron. Chill it before serving. 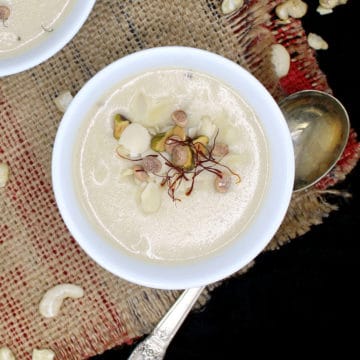