A dairy-free, melt-in-the-mouth vegan, Indian-style Zucchini Halwa made with almond milk and infused with the fragrance of cardamom.

My Zucchini Halwa is a great way to use up all those summer zucchini -- or other -- squashes you no doubt still have in your vegetable garden. And if you don't have a vegetable garden, I'm willing to bet there is an abundance of them at your nearest market or supermarket.

Have you heard that story about people who, not knowing what to do with all that zucchini growing in their yards every summer, take  the extra squashes, leave them on a neighbor's doorstep, knock, and run away before they'll be found? (True story from his childhood, according to a friend). Well, I'm not one of those people. This year I had five zucchini and yellow squash plants growing in my garden and we couldn't eat the veggies they produced fast enough. But I did come close to saturation point last week when, after picking one huge zucchini and one yellow squash, I couldn't think of yet another recipe to make with them.

It was reader Raana to the rescue. Raana happened to try my Vegan Doodhi Halwa recipe with zucchini and left me a message saying how much she loved it. I had contemplated using zucchini to make this very traditional Indian sweet before, but never got around to it. This time I had no excuse to procrastinate -- the time was just right.

So I got out my heaviest saucepan, grated the zucchini and yellow squash (use one or the other or both-- your results will be exactly the same), powdered some cardamom, and got the stove going.

Any kind of Halwa-- like this Vegan Gajar Halwa or Carrot Halwa, or a Doodhi Halwa -- is really a minimum-ingredient and low-labor recipe, but that does not mean you can walk away from it. It takes an hour or more for the liquid to reduce, so you do need to stick around and stir the halwa frequently.

The result is totally worth the time. I am a huge fan of both Gajar Halwa and Doodhi Halwa, but this Zucchini Halwa surpassed both. Perhaps it's because the zucchini tends to be more bland than the other two vegetables, which -- if you think about it-- is perfect for a sweet recipe. Also, the zucchini tends to cook up softer, sikier, and it melts in your mouth.

Raana was kind enough to share her recipe with us, and you can read it in the comments section of this Vegan Doodhi Halwa post, but I spun off my own Halwa recipe with almond milk  because I didn't have any pistachios on hand. Her version with pistachio milk sounds divine, so try it if you'd rather. 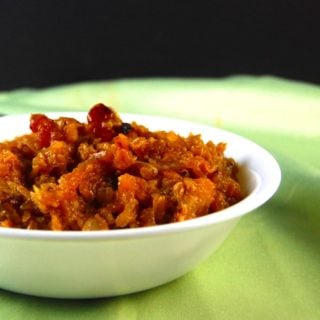