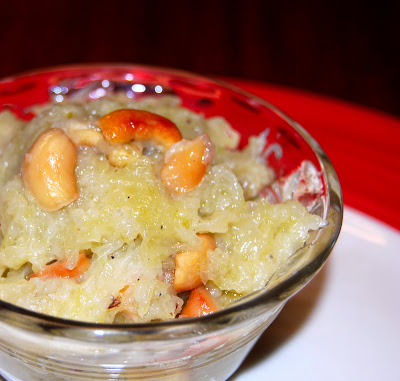 If I could wish for something absurdly impossible and food-related, I'd wish for the Vegan Midas Touch. Y'know, where all the foods I love would just magically turn animal-free, after which I could eat them until I could eat no more.

That touch could be particularly useful for veganizing some Indian sweets. Like the pedha, a classic Indian treat that looks like a plump disc and is made entirely of reduced milk and sugar.

Pedhas are unusually delicious and they are special because they are almost always accompanied by good news. Engagements, weddings, births, exams passed...there is no happy occasion that a pedha can't sweeten just a little bit more.

A while back a reader asked me for a vegan pedha recipe. The attempts I've made have ended up deliciously edible but without any resemblance to a real, actual pedha as I remember it. So I'll keep trying, and when I do hit upon a recipe...I'll share the good news with a pedha.
Until then, I've got a delicious Doodhi Halwa to keep you going. This is an Indian sweet that is not at all difficult to veganize and which, in its animal-free avatar, ends up being both healthier and more delicious.

A doodhi or lauki or bottle gourd is a pretty, pale-green squash that is a known cholesterol fighter and makes delicious subzis. Because the doodhi is very neutral-tasting it lends itself beautifully to a halwa.

The process of making a doodhi halwa is very similar to that for making a gajar or carrot halwa, which I've blogged about earlier. You grate the veggie, you reduce the milk, you add the sugar, and you have an incredibly fabulous sweet made of something that's actually good for you.

Besides, there really is no way to mess this one up. All it takes is a bit of patience.

I use almond milk instead of regular milk in my doodhi halwa. Cup for cup, almond milk contains about ⅓rd the calories in a cup of regular milk. Also, I like substituting nut milks rather than soy milk in Indian sweets because I find they add tons of flavor and no aftertaste, which can ruin a sweet. And because most Indian sweets including this one usually incorporate nuts, the flavor of almond milk lends itself naturally to these dishes.

That said, if you can't find almond milk or refuse to make your own (yes, you're allowed to be a rebel), you can go with vanilla soymilk. The halwa would still be delicious.

It's time for me to fly. Enjoy your weekend, all! 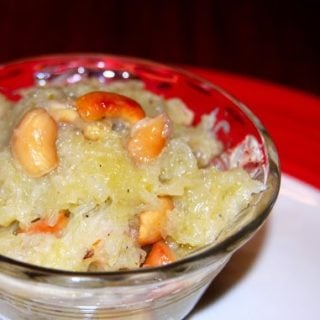