A spicy, tasty Indian vegan "chicken" biryani made with seitan chicken. It's the perfect comfort food.

I don't cook with meat substitutes often but sometimes I like to experiment because I know many vegans do enjoy them. Both because they offer tons of healthy protein without the fat usually found in meat, and because they simulate the texture of meat.

The secret to cooking with meat substitutes is to infuse them with tons of flavor-- or else they end up tasting like, well, substitutes for the real thing and that defeats the purpose of it all.

For my Vegan Chicken Biryani I used seitan, a wheat-based protein that's got a really chewy texture and that's quite popular even with some lacto-vegetarians I know. My memory of seitan was for a long time tainted by a dish I once had at a popular vegetarian restaurant here in the DC area. The dish was called "Kale Infinity" and as the name suggests it was packed with an infinite amount of almost-raw kale and flavorless slices of seitan.

Despite my adamant refusal to waste food, I am ashamed to say I did end up throwing most of that mess into my compost heap.

So when I decided to try my biryani with seitan, I wanted to make sure I put into it as much of a punch as I could pack. Which was not difficult because there are so many dashing and brilliant flavors you can add to a biryani.

It was perfect, and for the first time I can stomach seitan again. Joyfully. 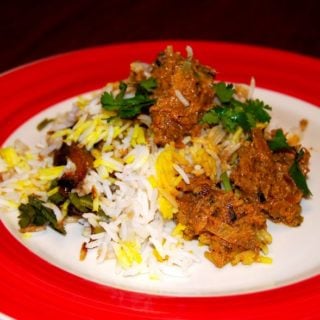