I don't have a terribly sweet tooth (although I know that doesn't sound right to those of you who've followed this blog for a while and been witness to the vegan baked goodies and Indian sweets I've posted here). But it is the truth-- I'd pick a savory snack over a sweet one any day.

For breakfast, though, and especially for breakfast on a Sunday morning, I love a bite of something sweet, although not cloyingly, richly sweet.

I was thrilled, then, to come across a recipe for Maui Muffins with an Orange Glaze in one of the vegan cookbooks I've owned for at least a year now and that has some truly unique recipes-- the Candle Cafe Cookbook (I really love their chocolate cake with a ganache frosting. In fact, it was after eating it at a friend's home that I rushed out to buy this cookbook).

These muffins sounded perfect-- delicious and complex with many layers of flavor, but healthy as well with whole wheat and fruit juices and coconut.

I have a quirk about coconut. I love it in curries and Indian dishes, and I adore it in traditional Indian sweets like modaks and karanjis and naralachi vadi. But I absolutely, positively cannot stand it in cookies, cakes, candies and other baked goods.

But I'd bought a bag of sweetened coconut a while back that was lying in my refrigerator asking to be used, and I thought, what the heck. The muffins sounded good enough to try.

I doubled up on the coconut in the original recipe because I didn't have pineapple, which the recipe called for and which is perhaps one of the reasons why these are called Maui muffins. So I am renaming mine Coconut Muffins instead. Also, instead of whole-wheat pastry flour, which the recipe called for and which I'd just run out of, I used durum whole-wheat flour which I did have on hand because that's what I use to make my chapatis. The substitution worked very well-- the muffins were moist and had a great crumb.

The recipe calls for agave nectar and for those of you who might not be familiar with it, this is a great natural sweetener which comes from the agave cactus. It makes a great substitute for honey which spoon-for-spoon has almost twice the calories as sugar does. (And, of course, honey is not vegan because those poor bees didn't work themselves to death so we could just swoop in and steal their honey.)

Agave nectar has a low glycemic index which makes it one of the healthiest sweeteners you can eat, and if you live in the United States, it is easy to find -- even the Costco I go to here in my Washington suburb stocks it.

So here it is, then, a delicious, healthy and easy recipe for a snack or breakfast or brunch or pre-breakfast...you get the idea? You can leave out the orange glaze if you want to reduce the sugar in the recipe, but I thought its sweetness was wonderfully complimentary to the barely-sweet muffin. 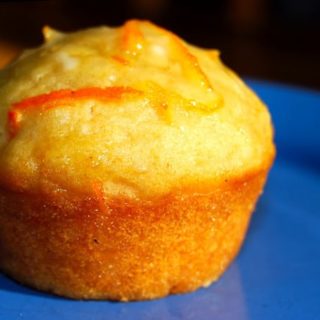 Coconut Muffins With An Orange Glaze

For the coconut muffins