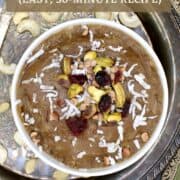 Here's a super easy vegan Cashew Halwa that literally takes minutes to make. Bonus: it's sweetened with dates so it's actually good for you. The base comes together in a blender, then give it a spin on the stove for a bit, et voila! Celebrating a compassionate Diwali has never been easier, and the animals will thank you, as will your waistline.

In my home we've celebrated a vegan Diwali for years now with tasty and dairy-free sweets like my vegan Gulab Jamun, vegan Barfi, vegan Laddu, and vegan Rabri, among many others. This year, I am so proud to add this vegan Cashew Halwa to that list of goodies.

This is a special recipe, not just because it is delicious but it is also actually good for you, sweetened as it is with dates. Dates are packed with fiber, magnesium, potassium, as well as antioxidants that shield you from heart disease and cancer, and they do a wonderful job of sweetening desserts without any need for processed, refined sugars that can harm you.

Before I move on a gentle reminder to my fellow Indians who are celebrating Diwali in India to protect street animals, and your pets, from fireworks. While fireworks have long been part of Diwali celebrations, we are now more aware than ever of the immense harm they cause animals who are far more sensitive to those loud and fiery outbursts than we are.

Street animals are especially vulnerable and some even become victims of deliberate cruelty at this time. In addition to not using fireworks, try and offer a safe shelter for street animals in your neighborhood this Diwali. It's the best way to teach future generations the importance of compassion and to make the gods smile on you. 🙂

A happy Diwali to you!

How to make vegan Cashew Halwa

The Halwa will keep fine at room temperature for a couple of days and in the refrigerator for a week. 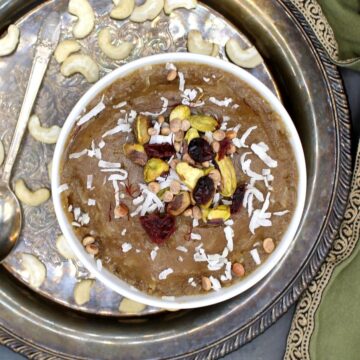