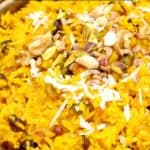 Zarda (Zarda Pulao or Meethe Chawal or Sweet Saffron Rice) is an Indian Muslim delicacy. Long grains of fragrant basmati rice are flavored with saffron and tossed together with dry fruits and sugar. It's food at its regal best, but it's also an easy recipe that nearly anyone can pull off in under 30 minutes.

Ramadan (or Ramzan as Indian Muslims say it) may be known as a time of fasting, but it really is a time for great food.

In India, street food vendors make the most of Ramzan, rolling out their best wares for ravenous eaters eager to break their fasts during iftar, the evening meal.

When I lived in Bombay, my coworkers at the Times of India building and I would make the short walk to Mohammad Ali Road, which would come alive after hours, especially during Ramzan, with the scent and cacophony of thousands of vendors cooking and selling all the gorgeous food you could imagine.

While many of those tiny stalls are open year-round, hundreds more seasonal stalls would crop up for the month when demand was the heaviest.

The din and clatter of long ladles against four-foot-wide kadhais bubbling with oil set the mood for the thousands of people who thronged the street, wide-eyed and literally kids in a candy store. They were not all Muslims, but they were united by a more visceral religion: the love of good food. For the evening, their only interest---in a city and on a street known for the worst of communal rioting---would be to find the best biryani or naan or malpua with rabdi available. It was utopia on earth.

One of those Indian Muslim delicacies beloved during Ramzan was, and is, Zarda, a sweet rice pudding studded with nuts and dried fruits.

Zarda derives its name from "zard" in urdu, meaning yellow, and the rich yellow color of this dish comes from saffron, which also adds a delicate but integral flavor and is quite irreplaceable here.

Zarda falls in the bracket of Mughlai Indian cuisine--food that originated in the kitchens of Mughal invaders from central Asia who went on to rule parts of north India for centuries. The rich cultural influences of the Mughals lingered long after their departure, merging effortlessly with local art and culture (I absolutely have to link here to this gorgeous interactive piece on Mughal miniatures from the New York Times that I hope you'll watch).

While the Mughals' best known legacy in India is arguably the Taj Mahal, their most beloved legacy surely is the food. Mughlai dishes like biryani, malai kofta and naan have merged effortlessly into local cuisine and are synonymous with Indian food today as well as easily accessible at Indian restaurants the world over.

Zarda, although not a common offering at Indian restaurants, is easy enough to make at home, and I'll show you how.

How to make Zarda

The technique used to make zarda is oddly similar to the one you'd use to make fried rice, although there really is no other similarity between the two dishes.

You boil the basmati rice in lots of water, the way you would pasta, until it's about 90 percent done. Toss it into a wok or a wide skillet with the other ingredients and stir fry it for a bit until all the moisture has evaporated, leaving soft, sweet, beautiful strands of rice behind.

Veganizing a zarda is not very difficult either. But you are taking a key flavor component, ghee, away, so you need to make some thoughtful substitutions.

Ghee flavors a lot of Indian sweets, rounding out their cloying sugariness with an appetizing nuttiness. It is almost impossible to remove ghee from an Indian sweet and expect it to taste just right. But impossible is not a word in my vegan lexicon and to ensure that this vegan zarda is as tasty as any non-vegan version, I make two substitutions: red palm oil, which has a smooth flavor and a brilliant orange color that works really great in helping intensify the yellow in this dish (you can use coconut oil instead), and pure vanilla extract.

Rose water, if you can find the edible kind, is a welcome addition, although not necessary.

Milk in the recipe is easily replaced with nondairy milk. Flakes of coconut are an important flavor ingredient in zarda, and I toss in a handful of sweetened coconut flakes, which work great.

I hope you will try my vegan version of Zarda during the month of Ramadan or any time you feel like a delicious and unique dessert that will transport you to another time. If you do, I'd love to hear! 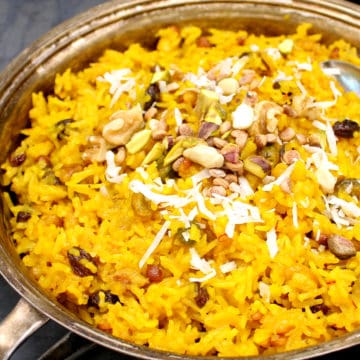