These vegan chocolate cupcakes with vegan chocolate buttercream need no selling. They're fluffy and pillowy and combined with the velvety frosting they'll send you into a deep chocolate coma you'll never want to wake up from. They're also soy-free and nut-free, so they're perfect for anyone, allergies or not.

I've been making, eating and feeding these vegan chocolate cupcakes for more than a decade now, and I wanted to bring them back to the front of the blog along with a recipe for a scrumptious and easy chocolate buttercream I usually top these cupcakes with.

And they are so easy to make. Easy enough that you could teach a child to make them. Although you probably shouldn't or they will be eating chocolate cupcakes for every meal.

Ingredients for the cupcakes and buttercream:

Just made these and they are truly scrumptious! jumping up and down because I love chocolate and I love cupcakes!" 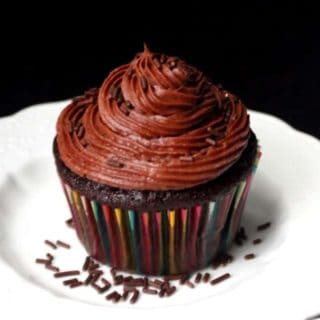 For the chocolate cupcakes:

For the vegan chocolate buttercream:

When I first posted this recipe almost 11 years ago, I dedicated it to my resident chocolate cupcake, my dog Opie, who was quite possibly the most adorably headstrong dog I ever walked. Opie has since passed away, and as I rewrote this post, I could not bring myself to erase this essay about this very special baby of mine, who lives forever in my heart.

Walking my dog Opie is like an adventure. You never know where it's going to take you, and you're lucky if you get back home on time and in one piece.Okay, I exaggerated just a little about coming home in one piece because so far I have, but the rest of it is absolutely true.

When Opie was younger, we tried all we could to train him to walk like a "good dog." But for some reason- likely the fact that he is the most stubborn creature I've ever known - he refused to fall in line.

Although he walks at least twice a day, rain, shine, snow or ice, Opie treats every walk like it's his first one. He goes raring out the door, eager to chase down every squirrel, stare at every person he sees, and sniff hard at every calling card left in the grass by every dog in the neighborhood.

Sometimes, he decides he wants to go a certain route. And arguing with Opie is not easy. If I walk in another direction than the one he's set his mind to, he will first bury his front feet in the ground, put his head down, and refuse to budge. His big, brown eyes meanwhile will make a frantic appeal, asking me to reconsider.

If I insist, he'll just sit down.

As you might have guessed, I usually give in.

But although he might sound like a bit of a pain in the rear- and he certainly is a lot of the time- it is indeed hard to fight that kind of curiosity and vibrance. I am always awe-struck by how his enthusiasm never seems to wane.

In freezing weather, as I plod with him through knee-deep snow, begging him to walk fast, he will plonk down on a smooth patch in a neighbor's lawn, turn on his side, and move vigorously back and forth to make a snow angel. Then he'll put down his ear to the ground, push up his playful butt, and go sliding through the snow, enjoying himself completely. Even though my fingers and toes are screaming for life by this time, I can't help but laugh.

Some of you might wonder - as I am sure most of my neighbors do- why I don't work harder to make Opie behave as I want him to. Well, Opie's not a badly behaved dog. As a stranger delighted by his antics once remarked, very astutely, he just has a mind of his own.

And I'm certainly not going to fight that.