Jump to Recipe Pin Recipe
These Vegan Irish Cream cupcakes are made with homemade vegan Irish cream. The frosting has a smidge of whiskey, giving these delicious cupcakes a bit of a kick.

I know, I know, I am a day late for St. Patrick's Day, but honestly do you need an occasion to eat cupcakes? Especially cupcakes infused with booze?

I was up baking these late last night, which might explain the off-kilter frosting, but they taste so good that I'm sure you'll forgive me. As you might have guessed from the name, the liquid in these cupcakes is Irish Cream. But Irish Cream of course isn't vegan so I made my own by mixing Desi's single-malt Scotch, soy creamer, coffee granules, maple syrup, chocolate and vanilla. It was so mindblowingly delicious that I wanted to drink it all up.

I'm glad I didn't, though, because it tasted just as fabulous baked into these cupcakes. I also added a teaspoon of Scotch to the frosting, which gave them that extra kick.

I've been under the weather today, so I'm going to run off to crawl under the sheets and leave you with the recipe. Hope everyone had a great St. Patty's Day, and here's looking forward to a great weekend! 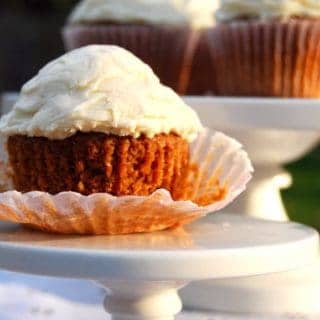