These golden, delicious vegan vanilla cupcakes are soft and fluffy. You can top them with a vegan buttercream or with a gooey, yummy chocolate ganache frosting.

My husband, Desi, loves cupcakes. So last week, for his birthday, I surprised him with these Golden Vanilla Cupcakes with a Chocolate Ganache Frosting.

Given how delicious these are, it is almost surprising how easy they are to make. And they are, of course, completely vegan.

Ok, time to stop the prattle and get on with the recipe. I hope you try these vegan vanilla cupcakes -- they're really delicious, and super easy to make. A win-win! 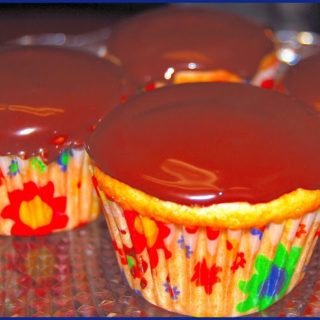 For the chocolate ganache frosting: