This vegan Lemon Pound Cake is intensely lemony and buttery and it has a soft, dense, velvety crumb. On top goes a fantastic and easy lemon glaze that'll leave you licking your fingers. A soy-free and nut-free recipe.

Here's a cake you'd be proud to serve anyone or guzzle down in secret all by yourself because who would want to share something so scrumptious? My vegan Lemon Pound Cake.

It's insanely lemony and deliciously sweet and it is so tender and soft that it just melts in your mouth. And on top of this amazing cake goes a lemony, deliciously sweet glaze that pushes an already exquisite cake into the realm of divinity.

I made a few versions of this cake to get the crumb just right -- and ate most of them with Desi and Jay -- and although I'm stuffed to my gills with all that cake, just looking at those photos is making me hungry. That's just how good it is. But you'll have to make it to find out. 😉

What is it called a pound cake?

Pound cakes were so named because they were originally made with a pound each of butter, sugar, eggs and flour. There was no leavening and the name itself was the recipe, see? Smart.

But over time, as cooks and times changed, pound cakes began to incorporate more ingredients, like sour cream, milk, and even leavening like baking soda and baking powder.

How do you make a pound cake without eggs and butter?

Taking away two of the four main ingredients of a pound cake may sound problematic, but with all we know about vegan baking today, it's not really that hard. Butter is easy enough to sub--I've used olive oil in the past just for a different flavor, but my advise is to just go with vegan butter for the best flavor. And you don't need a pound of it. You just need a quarter of a pound, or one stick of butter.

The eggs don't get a single substitute. Instead, I use a bit of cornstarch in the recipe, which helps with binding and also makes the cake crumb lighter. And I add some baking soda and baking powder for a bit of lift and structure, although you don't want too much of it, because you want that dense, soft crumb, remember?

What if I don't want to make this lemony?

You can leave out the lemon juice and just use nondairy milk. Add a teaspoon of apple cider vinegar to activate the baking soda and give your cake some lift and structure. I will say this in closing, though: the lemony pound cake is extra delicious.

Do I need the lemon glaze?

The short answer is, you don't. The pound cake is delicious by itself and if you don't want it to be too lemony you can skip the glaze altogether and either leave your cake naked or dust it with some powdered sugar.

That said, the lemon glaze is really tasty and it also gives the pound cake a prettier look. It needs just two ingredients--three if you add vanilla--so use it if possible.

Can I bake this cake in a bundt pan?

Definitely. But you will need to double the recipe if you're baking this in a standard bundt cake pan, which has a 12- to 16-cup capacity. A standard 9 X 5 inch loaf pan is around 8 cups. This recipe doubles easily, and you'll have more--and a prettier--pound cake to eat. Make sure you double up on the glaze as well, if using.

Tips and steps for making the lemon pound cake 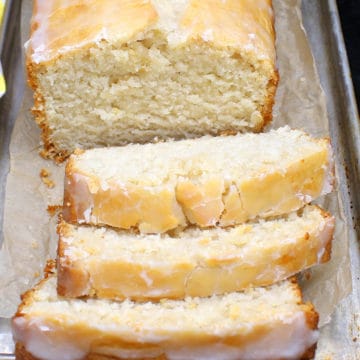 For the lemon glaze: