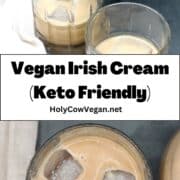 This super yummy homemade vegan Irish cream is better than Baileys and it's keto friendly too. Take just five minutes to stir up this silky liqueur with hints of chocolate, coffee and vanilla for a gathering of friends but don't feel too bad if you simply can't bring yourself to share it -- it's that delicious!

I have loved Irish cream for as long as I have been an adult, I think, but it's one of those drinks that's not easy to have, even once in a while, because it's loaded with fat and sugar. And after turning vegan I pretty much had to stop until Baileys came out with its almond milk based vegan Irish cream a few years back.

After I began eating low carb, that was out too. So right away I made a promise to myself to create a keto vegan Irish cream I could drink every once in a while with no guilt whatsoever.

Spirits can slow down weight loss on low carb diets by impacting ketosis, the metabolic process that burns fat for energy instead of carbs. But whiskey, along with vodka, gin, rum, brandy and tequila, has zero sugar and carbs, so it is okay to consume an alcoholic drink very occasionally (repeat, very occasionally) on a low carb diet.

Besides, I'm a working woman and mom to a feisty, argumentative teen. I desperately need that occasional drink to wind down and hold on to my sanity.

So I made myself a vegan keto Irish cream, loved it, and today I want to share it with you.

This is a creamy, thick, lush, luscious drink -- it's like sipping silk, and once you taste it you are sure to fall in love. You can add it to your vegan desserts or cocktails or pour it over coffee, but my favorite way to drink it is exactly how you see it in the pictures here--ice cold, on the rocks. Yummm.

Why you will love this vegan Irish cream

How to make vegan Irish cream

How many carbs are in one serving of this vegan Irish cream?

There is one gram of carb in each serving.

Irish cream is smooth and creamy with notes of vanilla, chocolate, coffee and, of course, the fruity, floral aroma of the Irish whiskey. Baileys vegan Irish cream has a hint of almonds because it is made with almond milk.

Most whiskeys on the market, including Jameson and Tullamore, are vegan and safe to use in a vegan Irish cream. If you plan on using another brand, you can check its vegan friendliness at Barnivore.

Can I make this vegan Irish cream recipe with coconut milk?

I've tried this recipe with coconut milk and I honestly don't love the strong coconut flavor in the Irish cream. But if you don't mind it go ahead and use it.

I don't have Irish whiskey. Can I use another whiskey?

Unless you are an Irish cream purist you can use nearly any whiskey in this recipe with great results. I've frequently added Scotch or bourbon depending on what I have on hand and it always tastes amazing.

How frequently can you drink alcohol on a keto or low carb diet?

This is a question I researched thoroughly when I started eating low carb and the jury is still out. Some say it's okay to have a drink a day, others warn no more than a drink a week.
I can only speak from my experience and I have found that a single alcoholic drink, which I usually have on Saturday evening, doesn't really hurt me so long as I don't follow it up with bingeing on carby foods over the weekend. If you are on a low carb weight loss journey you will need to see what works for you by trial and error.
Keep in mind that what you drink also matters--beer has lots of carbs, so avoid it on a keto diet (unless you can find a low carb beer). Most distilled spirits like whiskey, vodka, gin, tequila and rum have no carbs, so they are okay. Wine has carbs but fewer so than beer (about four grams per five oz serving), so you could fit it in if you are careful with the rest of your diet. 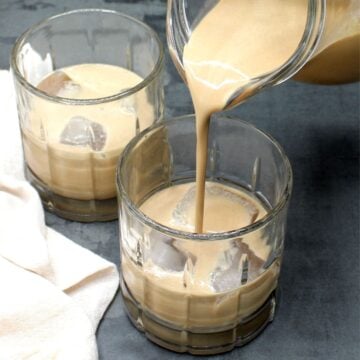