Baking cupcakes that are moist, light, eggless and dairyless seemed like an almost insurmountable challenge to me when I first went vegan.

Brainwashed as I had been through years of baking about the importance of butter and eggs to the process of cakemaking, I believed that a good cake was impossible to make without these ingredients.

My Lemony Vegan Cupcakes with Cream Cheese Frosting are, to me, a small triumph for veganism. They taste so good, I bet they'd convert any sceptic. Desi is a regular cupcake gourmet and even he agrees these are among the best he's tasted.

So go on, I dare you. Put on your baking gloves and take a stab at these. I know you'll be back for more!

Try these vegan cakes next: 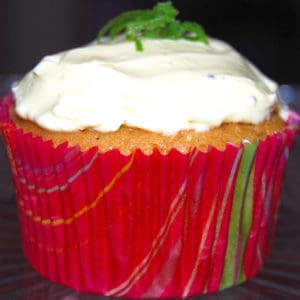 For the lemon cupcakes

For the cream cheese frosting