These vegan pumpkin cheesecake cupcakes are flavored with cinnamon and nutmeg. They are creamy and smooth and just right for pumpkin season.

It was a dark, stormy night in Savai Vere, Goa. The decaying Portuguese-era mansion on the hill was shrouded in grey clouds and sheets of rain, and the wind creeping in through the cracked stained-glass windows made eerie, whistling sounds. Chhaya, on a visit to see her cousin Sadu and his family in this, her mother's ancestral home, shivered in the stringed charpoy that was her bed for the night. The room was cold and damp and the air inside was stifling and still. The people closest to her were several rooms away, fast asleep.

It was close to midnight when she fell into a restless sleep, only to awaken what seemed to be just minutes later. It was a soft sound,  a voice calling her name. She sat upright in bed, sweat breaking out across her forehead. A beautiful young woman was standing just a few feet from her, smiling sweetly, dressed all in red.

Come with me, she said, and Chhaya, powerless to do anything else, did. The woman walked down the long corridor, turning every once in a way to motion to Chhaya to keep following her. Then, without warning, she disappeared through a locked door. Jolted out of her stupor, Chhaya ran to the nearest bedroom door and knocked frantically.

She knew, before they told her, who it was: her cousin, Sadu's sister, who had died in that house as a young woman, just days before her wedding. "She appears to other young women when they stay in the house, particularly when they are at that time of the month," Sadu's wife said, rolling her eyes meaningfully.

And so it was that Chhaya, my stepmother in the flesh, had what she swears was her first and only encounter with a real, live ghost. Needless to say, she never again stayed the night at Sadu's.

Over the years I've had my share of friends and relatives with ghost stories of their own, as doubtlessly you have too. And although very much a realist, I've been powerless to resist them because unlike Desi--who dismisses the idea of ghosts offhand-- there is a big part of me that simply can't resist a good ghost story. I will never forget the first time I read the Fall of the House of Usher, one of the scariest stories ever written (Poe is one of my favorite authors) and I can't remember the number of times I missed classes at college to slip away to a horror movie with my friend, Radha, at the only neighborhood theater that showed Hollywood movies. And I will admit I would get the creeps when my brother, Ashwin, collected friends in our home each time our parents were out to conduct what he considered a seance. Fortunately for the rest of us, he never summoned anything other than a good disciplining from our father when he found out.

My father himself, definitely not a believer, would nevertheless relish telling us about the headless horseman his grandfather had encountered outside a prison famous for its hangings (in India's pre-independence days) in his ancestral hometown in Karnataka. Or the mysterious woman who haunted cooks prepping all night for wedding feasts, demanding they hand over the sweets they were making.

There were ghosts even in a crowded city like Bombay where it’s hard to turn around without bumping into another living person. One family friend was followed by what he swore was a statue on a lonely bridge in Parel, a neighborhood in the city with a famous crematorium. A friend’s brother was confronted (or rather pushed from behind) by a ghost outside a crematorium in Andheri, a Bombay suburb. (Apparently, he turned around and there was no one there, therefore the conclusion.) And when my father’s uncle passed away, his wife told the family -- without batting an eyelid while everyone else’s jaws dropped -- that she didn’t miss him at all because he  was very good about visiting her every night for a long chat.

Apparently, we are no different here in America. A Huffington Post poll last year found that 45 percent among us believe in ghosts. And a Pew Research Poll, also last year, found 18 percent say they have actually seen one. I have had at least one friend, Susan, tell me of a chilling encounter in a hotel room with a woman who appeared and then passed right through her body. Susan, who prided herself on her immaculate vegan digestion, swore that it was the only time in her life that her system shut down completely out of fear, constipating her for two full days.

And then there was that one time I had my own doubts: read about it here, if you haven't already, in this past  Halloween post for Itty Bitty Chocolate Cupcakes. Or, if you're just in the mood for some fun, ghostly fiction, read this post about the ghost who lived in a banyan tree and would do anything for some good food.

Now that I've gotten you good and scared and all set for Halloween, I want to share with you a treat that's long haunted me: these cute little Pumpkin Cheesecake Cupcakes.

I am not a crafts-y person, by which I mean you wouldn't catch me dead shaping food into eyeballs or bloody fingers or whatever it is that some enthusiasts so enjoy doing for Halloween, and more power to them. I just like making cute food and then devouring it. And these itsy-bitsy cupccakes are nothing if not cute.

And they're easy. The batter all comes together in a food processor, but use a whisk if you don't have one. The cupcakes themselves are really mini cheesecakes, made with a rather traditional recipe. There is no crust: instead, I topped them with a lime buttercream and then crumbled some cookies on top because, let's face it, what's a cheesecake without a cookie crust? And although they bake up nicely and are surprisingly easy to unmold, these cheesecake-cupcakes are mousse-y and light.

Make them fast, and I promise, they'll disappear right before your eyes. 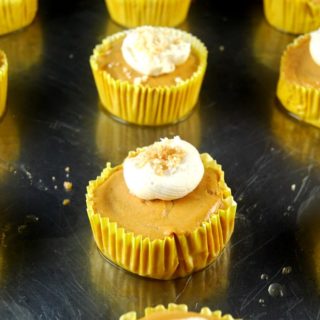