These vegan saffron cheesecake bars have a whole-wheat crust, are specked with walnuts and are tender and shortbready. They are also perfectly sweet without being cloying. The cheesecake layer is soft and gooey with the warmth of saffron adding more flavor.

I have for you today a recipe that's going to make the child in you beam for joy: Saffron Cheesecake Bars. What's more, they're wholegrain.

I was thinking of making a perfect snacktime recipe for Jay that would also put a gleam into sweet-seeking Desi's eyes. These bars, with the elegance of saffron and healthfulness of whole wheat, have just the right appeal for a discerning adult. But they also have the sweetness and vibrance to make a little boy's heart -- and tummy -- perfectly happy.

The whole-wheat crust, specked with walnuts, is tender and shortbready, and perfectly sweet without being cloying. The cheesecake layer is soft and gooey with the warmth of saffron giving it that incredible je ne sais quoi.

I baked my bars in a 9 X 9 inch baking pan, which made them a little slim, but I like them that way. For thicker bars, use an 8 X 8 inch baking dish. On to the recipe now, but first, a little rant:

Just last week came news that my home state in India, Maharashtra, had banned the sale of beef -- the third state in India to do so. Now, for a vegan, you might think that's reason to rejoice, and in a way it is. The fewer the animals that are killed, the better it is for all of us, and especially for the animals. But the reason I am not exactly jumping up and down is because the motivations behind the ban are insidious: they are a blatant attack on the food freedoms of India's minorities who are increasingly being pushed into a corner by the country's Hindu leadership.

As everyone knows, we Hindus don't eat beef because we "revere" the cow, although that doesn't stop us from abusing her in tabelas (dairy factory farms) where she is pumped with hormones and spends most of her life chained in a tiny, often filthy little space with hundreds or thousands of other cows. She is impregnated constantly, and her calves are taken away from her as soon as they're born because, heaven forbid, they should drink up that precious milk. In fact, India's largest milk manufacturer, Amul, is on record saying that it slaughters calves by the tens of thousands each year to keep the Indian obsession with milk alive and well.

The largest groups that do eat beef in India are the Christians and the Muslims (who also happen to control the beef trade in India). They are the ones whose wallets -- and stomachs -- will be hardest hit by the ban. Against that backdrop, the beef ban begins to look more like an overt case of discrimination and less like protection for cows.

I have seen how revered cows are in India. In the country with the world's largest cattle population, stray cows and calves, their skin sticking to their bones, wander on crowded city streets, often being hit and maimed by impatient cars. They forage trash bins for their meals, chewing on plastic and paper to fill up their stomachs, because there's no grass or any other real food to be had. When they wander into areas where they are not wanted, no one hesitates to pull out a stick and shoo them away with a few stinging smacks to the bottom.

Drinking cow pee to "purify" ourselves and offering cows a banana leaf piled with food on festival days so  we can attain nirvana after we die does not really mean that we truly love -- or indeed revere -- this sweet and gentle animal.

Because if we do love them, why don't we ban the sale of milk, so cows and their calves don't have to suffer just as badly as those animals killed for their meat. In fact, you could well argue that given the condition dairy cows live in, they might be better off dead. Why don't we ban the sale of chicken and mutton, both from animals who are sentient, godly beings just as surely as the cow is? Why don't we stop the slaughter of lambs in some of India's biggest temples, like Calcutta's fabled Kalighat?

We know all that won't happen, because most Hindus enjoy eating mutton -- and chicken -- and the ones who don't eat meat love their milk and ghee and yogurt and couldn't really care less about how the animals who supply them are treated.

But then again, who said it was ever about the animals?

On to happier things, and those Saffron Cheesecake Bars which are, of course, dairy-free. 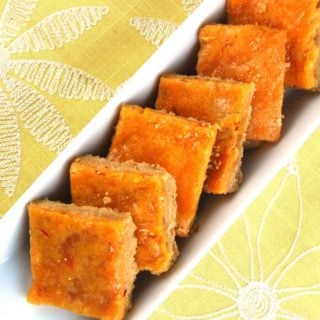 For the cheesecake topping