Summer's arrived, scorching and sweltering, and as much as I longed for it in winter, I find myself now wondering, why? There's one big bonus, though, for the vegetable gardener-- I can see my eggplant, okra, tomatoes, beets, and spinach growing almost daily. If I watched long enough and hard enough, I might just see the zucchini grow!

I made raised vegetable beds this year, instead of just mixing new soil into the existing one on the ground, as I did in past years. This was followed by multiple trips to the store to buy enough topsoil and humus to fill them up. I have Desi to thank in big part, because who do you think put the veggie beds together and then hauled all that soil?

I learned a thing or two about raised vegetable beds that I thought I'd share.

One, be sure that the wood you buy is not treated with chemicals (as a lot of wood meant for the outdoors is), because they will leach into your soil and get into your veggies. After walking through Home Depot twice and finding that they did not carry untreated wood that was also long-lasting, like oak or cedar, I settled for reasonably priced oak beds from a local nursery. They were sold precut and notched and all, and all Desi had to do was nail them together, which took him just a few minutes.

Second, you need a 50-50 proportion of topsoil to humus (or soil conditioner) to get a decent vegetable bed going. And, of course, try to buy organic if possible.

Soon after I planted the veggies in their homes and they were all cozy, a colony of ants descended on them. I am all for sharing my produce with the ants and the birds and such, but the plants need a chance to grow first. So on Desi's advise (he had seen his mum do it) I sprinkled some turmeric powder around the bed and what do you know? The ants just disappeared. I don't believe the turmeric kills them (I wouldn't want that), but it does seem to repel them. Another great use for this invaluable kitchen spice.

My dad also recommends compost tea, that rich, stinky, brown liquid that leaches from your compost bin (if you have one with holes on the sides, like I do-- I've slapped a wide plastic tub under the bin to collect the tea) as a great, organic bug repellant. Just put some in a spray bottle and spritz it on your plants.

Now on to today's recipe, Saffron Buns. It's a weird irony, but summer makes me want to bake. Yes, the idea of starting up the oven in an already 90-degree kitchen may be odd, but there are other advantages to baking in summer. To cite just one, I feel more like actually doing something, instead of snuggling under the covers in front of the television set. Besides, the bananas ripen easily making it a perfect time to make some vegan banana cake, the zucchinis just call out to be baked into some deliciously healthy vegan zucchini bread, and even the yeast multiplies rambunctiously, sending breads mushrooming into big, fat, happy loaves.

I'd been wanting to make a vegan Saffron Bun for the longest time, and although the kitchen was unbearably hot while they baked, I'm sure glad I did. And now I can share them with you. 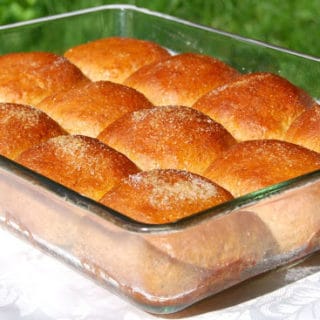