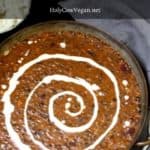 Dal Makhani is a North Indian "dhaba" style dish of creamy lentils flavored with butter and garnished with cream. My vegan version is dairy-free, of course, but it's also made with just 10 pantry ingredients and is as traditional as it can get, giving you a true restaurant experience in the comfort of your home. This is also a gluten-free, soy-free recipe and it can be nut-free, making it delicious and healthy eats for everyone.

There are perhaps a million recipes for Dal Makhani, the fabled Indian restaurant style dish, on the internet, and half of them are for vegan versions.

I've shared a couple myself, including an Instant Pot version for a hurried weekday. But this one is unequivocally my favorite vegan Dal Makhani recipe: a smooth, creamy, buttery one that takes a little longer than the IP version but also one that requires only a handful of pantry ingredients to cook and is as close to the real thing as it can get without cream and butter.

There's something quite sublime about a Dal Makhani, and if you've eaten it, you know why. Its rich, buttery flavor is to die for, and it's not brashly spicy as dishes from India sometimes tend to be, which makes it good eats for everyone. But if you like to overload on flavor, mind you, there's no deprivation of your senses here. Because hidden behind that velvety texture and mouthfeel are complex, barely-there notes of spicy, sweet, tangy and bitter that are as surprising as they are delightful.

Making a vegan Dal Makhani is simple--it's actually one of the easiest dals you will ever make and it's pretty much fool-proof. But there is one basic conundrum that arises when you try to veganize a Dal Makhani: the primary flavoring ingredient in this north Indian dal is makhan, or butter.

The tendency among many vegan cooks is to substitute the butter with something else that's creamy, like coconut milk. But that makes no sense for at least a couple of reasons.

For one, if you're looking to emulate a buttery flavor, you want something that will taste buttery. Adding coconut, a distinctive flavoring agent by itself that tastes nothing like butter, gives your makhani dish a very different flavor. Which would be well and good -- and even tasty, I suppose -- if you were looking to eat a Dal Coconutty ;). But it's simply not a Dal Makhani, see?

Also, if you want to cook Indian cuisine, the first thing you should learn and understand is that there is no such thing as Indian cuisine. When you make food specific to a certain region of India, you don't just want to substitute with other ingredients that you think broadly belong to "Indian" cuisine. You need to give some thought to whether or not that flavor would preserve the integrity of the dish you're making and whether it belongs there in the first place.

India's regional cuisines sprung from the ingredients that grew locally in those regions. Coconut, for instance, grows abundantly along the west, south and some parts of eastern India, and it's a common ingredient and flavor in the food cooked by locals in those areas. But in north India, including in Punjab, which is one of India's biggest dairy producers, it is butter and cream and ghee and other dairy products that add creaminess and richness to foods. Coconut is rarely, if ever, eaten there and it's certainly never used in a Makhani.

I have always used vegan butter and cashew cream in my makhani recipes, and that's what I use in this vegan Dal Makhani. Together, they add the same rich, smooth taste to the vegan makhani without taking away from the real flavor of this dish. And at just 131 calories a serving, they definitely do not take away from the utter healthfulness of this dish.

Make it, for a true dining out experience at home. And then come back and tell me all about it.

How to make the best vegan Dal Makhani:

What do I serve with the Dal Makhani?

You can serve this with a vegan naan or this easy Jeera Rice or both.

If you're making this a special meal, serve alongside a leafy curry, like Vegan Palak Paneer with Tofu or Sarson ka Saag. Add a Vegan Cucumber Raita on the side.

Feeling even more decadent? Wash it all down with a vegan Mango Lassi. 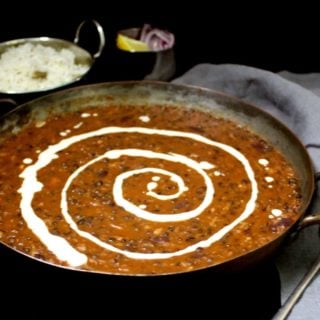 Dal Makhani is a North Indian "dhaba" style dish of creamy lentils flavored with butter and garnished with cream. My vegan version is dairy-free, of course, but it's also made with just 10 pantry ingredients and is as traditional as it can get, giving you a true restaurant experience in the comfort of your home. This is also a gluten-free, soy-free recipe and it can be nut-free, making it delicious and healthy eats for everyone.
5 from 5 votes
Print Recipe Pin Recipe Review Recipe
Course: Dal, Main Course
Cuisine: Curry, gluten-free, North Indian, nut-free, Soy-free, Vegan
Prep Time: 10 minutes
Cook Time: 20 minutes
Dal cooking time: 1 hour 30 minutes
Servings: 10 servings
Calories: 131kcal
Author: Vaishali · Holy Cow! Vegan Recipes