My vegan Navratan Korma is a decadent but healthy dish with a luxurious sauce of cashew cream that coats perfectly cooked veggies like potatoes, carrots, green beans and bell peppers. This is the dish to impress friends and family with.

A Navratan Korma is what Indians call a "shahi" dish: a food so sumptuous that it is fit for royalty.

This is distinct from a Vegetable Korma, which is also utterly delicious. In a Navratan Korma cashews and raisins melt into a luxurious, silky, creamy white sauce that coats perfectly cooked and tender cauliflower, carrots, green beans and potatoes. It's a dish you might imagine yourself eating at a fine restaurant or in a palatial dining room with that extinct species called an Indian maharaja. 😉

But why aspire to that when you can have this fancy dish in the comfort of your own home?

Eaters outside India often refer to "Indian food" as if it were a monolithic entity, but as someone even a little more than casually acquainted with the intricacies of Indian food would know, there is no such thing as "Indian food." India is an ancient country, with many regional and religious flavors, and mixed into the food are not just these diversities, but also the tastes and ingredients contributed by those who migrated into India over hundreds and even thousands of years, and stayed there.

Navratan Korma comes from what is known in India as Mughlai cuisine -- the cuisine of the mughuls or moghuls, Persian invaders who set up vast empires across the Indian continent (Shahjahan, the guy who built the Taj Mahal, was one of them). Mughlai cuisine has a distinct flavor and even distinct aromas of its own, and it generally uses lots of meat, nuts and dry fruits -- all ingredients that, in those days, were more accessible, perhaps, only to royalty.

The word "navratan" literally translates to "the nine gems," and the story goes that the name of this dish possibly derives from the Mughal emperor Akbar's nine famous and talented courtiers referred to as "navratan" or the nine gems. Another story attributes the name to the fact that the dish is supposed to be a melange of nine vegetables.

Despite these fancy antecedents and associations, the Navratan Korma is a rather accessible dish to even those of us who are not royalty. It is not a difficult dish to make  and you do not need nine types of veggies (although you could certainly use them). And although there are a few separate steps involved, befitting a royal dish, it should take you no more than an hour to cook up.

And imagine the rewards when you put this on the dining table!

Why is the sauce in this korma white?

While most Indian curries are yellow or red, the sauce of a navratan korma should be whitish. That's because the sauce is made of cream, nuts and yogurt. Don't add turmeric in here if you want it to look authentic.

In my vegan Navratan Korma, I replace the cream with a ground paste of cashewnuts, which is a much healthier substitution and which goes perfectly with the fruits and spices. In fact, even in my pre-vegan days, I'd often use cashewnut paste or pistachio paste as a substitute for cream in meat and vegetable dishes, and as you know from all the Indian recipes I share here on the blog, it works perfectly.

Don't use coconut milk in a Navratan Korma. While it's fine in a regular south Indian vegetable korma, a navratan korma is a north Indian dish, and coconut and north Indian food very rarely mix. I'm all for standing tradition on its head and mixing up traditions, but some things just don't taste right when you screw 'em up with too much imagination. 😉

What vegetables can I use in this korma?

Traditionally, you'd use carrots, potatoes, green beans and green peas, but here's one place where you can do some experimenting. I like adding jewel-colored bell peppers in here, and this time I left out the green peas. You can also use sweet potatoes and zucchini here with good results.

Also, raisins are used to add some sweetness to this royal dish, but you can also use chopped fresh or canned pineapples.

What to serve with the korma

The Navratan Korma is a thick curry so it's best scooped up with a bread like a naan or roti.

But you can certainly serve it with rice and it'd be spectacular with a very simple jeera rice.

Looking for other Indian restaurant-style dishes? 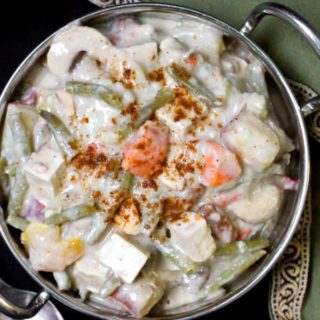