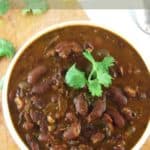 A rajma is a spicy north Indian dish of red kidney beans in a thick tomato-onion gravy. You have possibly eaten it at an Indian restaurant, but, with my simple recipe, it's just as easy to make it at home. Serve it with naan or rice and a raita for a delicious meal.

Yes, yes, I know. You haven't been waiting with bated breath for me to post my Rajma recipe. Or have you?

It's incredible that after nearly seven and a half years of food-blogging-- mostly about Indian food -- I wake up and find that I never got around to posting this really popular Indian restaurant dish that I love and make in my kitchen at least once a month. Amazing. And inexcusable.

But I'm here to make amends with this super delicious, super healthy recipe. Rajma is rather like the lesser-known but just-as-good-looking sister of Chana Masala. Both are north Indian dishes and the ingredients that go into them are almost exactly identical. But the beans used in each-- red kidney beans in case of Rajma and chickpeas or garbanzo beans in case of Chana Masala -- give these two dishes totally different flavors.

And there you were, thinking a bean was just a bean was any old bean.

One of the reasons I love making Rajma is the fragrance that fills the house and lingers for hours after you cook it. It's a teasing, hunger-inducing, delicious fragrance that absolutely drives you nuts and makes you want to eat more and more even if you just finished eating not half an hour ago. It's not just that garam masala that goes into it, or those tomatoes, or those onions and that ginger-garlic paste. It's the chemistry of all of those ingredients marrying together that makes absolute magic. 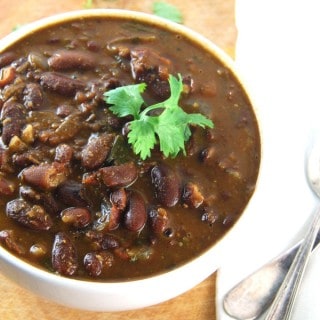