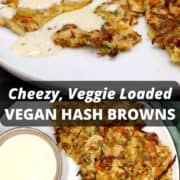 These delicious and cheezy veggie loaded Vegan Hash Browns have it all: they are crispy and golden, and they have the healthful goodness of fresh zucchini, carrots and potatoes with pockets of melting, gooey vegan cheese. Cumin and thyme add lots of flavor, and you can even make them oil-free. Breakfast just got so much better!

I could eat potatoes at every meal, and just the thought of these cheezy, veggie-loaded vegan hash browns is enough to get me out of bed and into a frenzy of excitement on the laziest of weekend mornings.

These are quite possibly the most delicious hash browns you will ever eat, vegan or not, and eating potatoes, as you know, is one of the healthiest things you can do for your body.

If you try these, be sure to let me know by leaving a comment below or by tagging me @holycowvegan on Instagram.

Why you'll love this recipe

How to make vegan hash browns

When you squeeze out the liquid from the veggies, collect it in a bowl. If you tip the bowl, you'll see that the starch from the potatoes has collected at the bottom. Pour out the liquid part, but take care to keep that starch at the bottom of the bowl, then add the veggies to it and mix it all in. The starch will help hold the hash browns together.

What to serve with hash browns

Hash browns are usually served as a side with other dishes at breakfast, but they make a very satisfying breakfast by themselves. We love them with a hot sauce or a seasoned vegan mayo.

You can also serve them as a side with vegan scrambled chickpea eggs or with an eggless omelet like a moonglet or besan chilla. 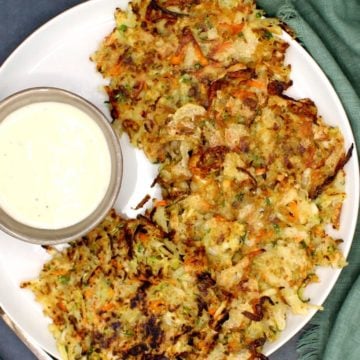