These golden Vegan Hash Brown Waffles are crispy, savory and loaded with veggies, making them the perfect breakfast food. A gluten-free, soy-free and nut-free recipe.

Jay and I share a savory tooth, and sometimes, as a weekend breakfast treat for him and for me, I make these savory, veggie-loaded hash brown waffles.

Around here our past couple of weekends have been washed out by grey, dreary skies and rain, which means we have been staying in and and cooking and eating. A lot. Not that anyone's complaining, with foods like these waffles to brighten up our days.

They come together fast, and they look so pretty, they are great to serve to company too, for breakfast or brunch. All you need to make them are:

-Brown rice or any rice flour

-Chickpea flour, which is optional. I like chickpea flour because it adds more protein into the meal, but I also like to leave it out at times because its flavor is strong and hard to miss even in small quantities.

-Aquafaba, that chickpea brine you just can't have enough of

I also throw in a dash of turmeric for the healthiness and the pretty color, although it's completely optional.

If you try these waffles, be sure to let me know how they turned out for you. 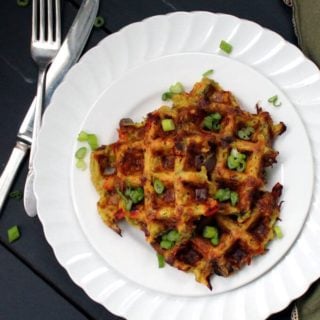