Jump to Recipe
This recipe for gluten-free vegan corn fritters, with the freshness of leeks, garlic greens, and coriander leaves, will leave your mouth watering for more. And best of all, they are fat free.

I first waltzed into Edith Wharton's deliciously tragic world during a lonely week in New York City. It was over a decade ago and I was traveling with Desi who was at a conference all day most days, leaving me with nothing but time on my hands. When I tired of looking around (yes, there's a limit to tourism even in the world's most famous city), I stopped at a bookstore for a good read. I picked up The House of Mirth because the book flap told me it was about a tragic young protagonist navigating New York City's unforgiving, unbending ruling class of the late 19th century.

It was a memorable tryst because Wharton's the kind of writer whose sense of human drama transcends time and space and it was not difficult to empathize with the protagonist, Lily Bart, even though my life was nowhere near as infused with romantic adventure and drama as hers.

The next time I met Wharton's imagination was not long after, in a movie based on her Pulitzer-winning novel, The Age of Innocence.

This time I was not just reading about a world dominated by the opulent lifestyles of a privileged few from long ago. Martin Scorsese's magnificent movie version, which I chanced upon during the mindless act of channel-surfing, literally transported me into a time when the women were always perfect but incredibly complex, and the men were arrogant and aloof until love made slaves of them.

Ever since, each time the movie's on-- much to Desi's annoyance because he likes to dismiss even classic romances as "chick flicks" -- I refuse to switch channels. There's just something about all that quivering, unfulfilled passion and all those beautiful people living their beautiful, imaginary lives that thrills me to the core.

But as much as I love the movie, and as much as I love Wharton's evocative writing, I only actually took up the book this week. It held no surprises for me, but I simply could not tear away from it until the last page was turned. I did take a break, however, and here's why that happened. Just as I had gotten all wrapped up in all the intrigue and nail-biting romance, I was interrupted by a craving and a longing all my own after reading the following paragraph:

After a velvety oyster soup came shad and cucumbers, then a young broiled turkey with corn fritters, followed by a canvas-back with currant jelly and a celery mayonnaise. Mr. Letterblair, who lunched on a sandwich and tea, dined deliberately and deeply, and insisted on his guest's doing the same.

Well, here was a little piece of romance in Countess Olenska and Archer Newland's life that I could actually share. So off I went to my kitchen to cook up a version that is perhaps nothing like what people ate in the late 19th century because do you honestly think they worried about making food fat-free then? No wonder they were so content. Well, almost.

My healthy vegan corn fritters are delightful and delicious, and to make them even more so I infused them with a lot of herby goodness. My dormant vegetable garden is already springing back to life as the weather warms up, and I picked handfuls of chives and garlic greens to add flavor to my fritters without eclipsing the sweetness of the corn. I also threw in some oniony leek greens, although scallions would do just as well here.

These fritters are very crispy if eaten rightaway, when they are piping hot, but because they are pan-fried with fat-free cooking spray-- not deep-fried in oil the way corn fritters usually are-- they do lose their crispness at room temperature. But you can bring them back to crunchy life by popping them into a hot oven for five minutes.

So here they are, my rooted-in-reality and fat-free, good-for-you corn fritters. Because this is the age of no mysteries and we all know what  fat can do to our thankfully corset-free waistlines. 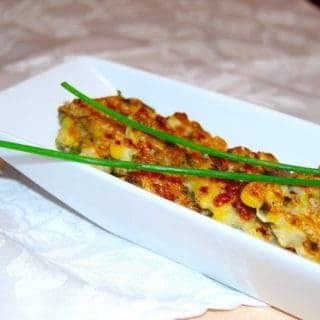