Adai was one of the first foods I tasted in my Tamil mom-in-law's kitchen. It became an instant favorite. Unlike its simpler but yummy counterpart, the plain old dosa, an Adai is a star, hiding complex flavors beneath its lovely, golden skin.It is also, in my opinion, a little more fun to cook because it lets you play around quite a bit with the ingredients so you can make your own special version suited to your own special tastes. To my Golden Delicious Adai, I added ginger, curry leaves, onions and cabbage, and the results were amazing. Spinach or other leafy greens would also work very well here.Now while a traditional Adai tends to be thicker than a dosa, Desi doesn't really like it that way. He loves everything thin and crispy. So my Golden Delicious Adai tends to be thinner and crispier than usual- a crepe, rather than a pancake. I ground up the cabbage and onions along with the rice and dal, instead of just chopping them and mixing them into the batter at the tail end, to make it easier to spread the adai on the griddle in a super-thin layer.So without further ado, here it is in all its mouthwatering glory, my Golden Delicious Adai. Enjoy! 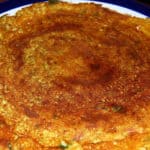 Serve the adais hot with coconut chutney or just a dollop of vegan spread. Either way, it's delicious! (C) All recipes and photographs copyright of Holy Cow! Vegan Recipes.