This creamy vegan Orzo Risotto with Brussels Sprouts is an easy and quick weeknight dinner recipe. Use my Best Vegan White Pasta Sauce as the base, toss some sliced Brussels sprouts on a sheet pan, and dinner's ready. Vegan, soy-free, easily made gluten-free. 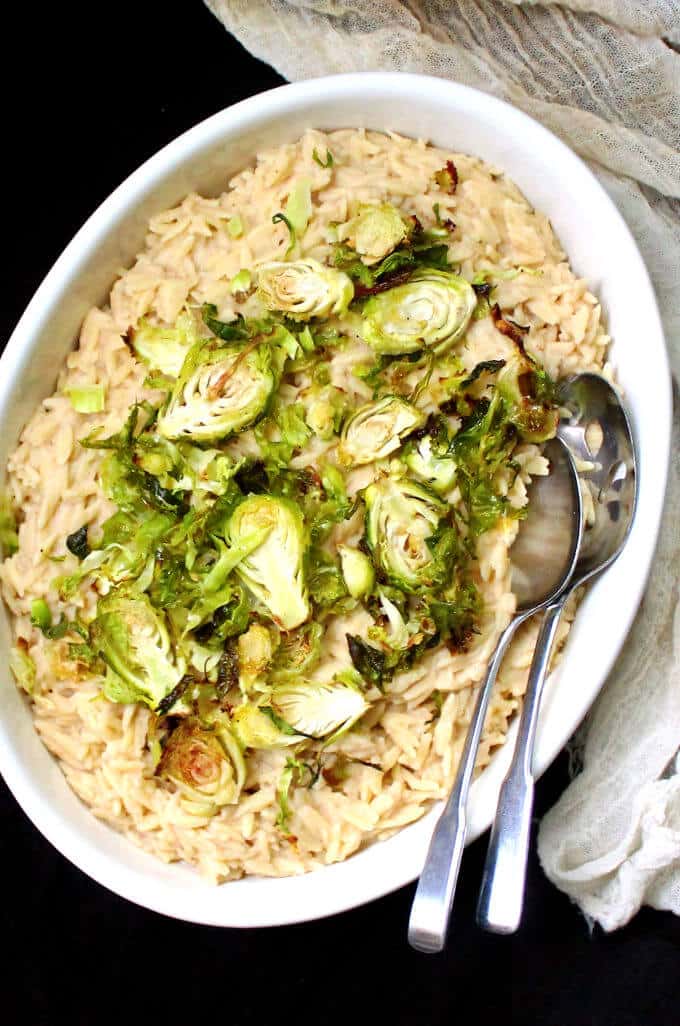 It's the last day of school today, and I am dreading the nearly three months that loom ahead. Not that I mind having my little June bug around (not so little anymore -- he turned nine yesterday. Sigh.). But keeping a 9-year-old entertained, even with the usual activities and some vacation time thrown in, all while juggling my own workday, can be a demanding job, at best.

I am a firm believer that a healthy body leads to a healthy -- and calm --  mind, so one of the ways I try to keep my sanity intact during these days is by making sure that he eats healthy  -- healthier than he does on school days when I have absolutely no control over what goes into that little mouth. Because although I pack him a lunch every day, I am not naive enough to believe he actually eats all of it, or doesn't dip into the cafeteria "goodies" from his friends' trays. And can someone tell me why teachers these days think they should reward kids with candy and Cheetos for a job well done? Is an enthusiastic "nice work" not good enough?

Whew. Ok. So this pasta. 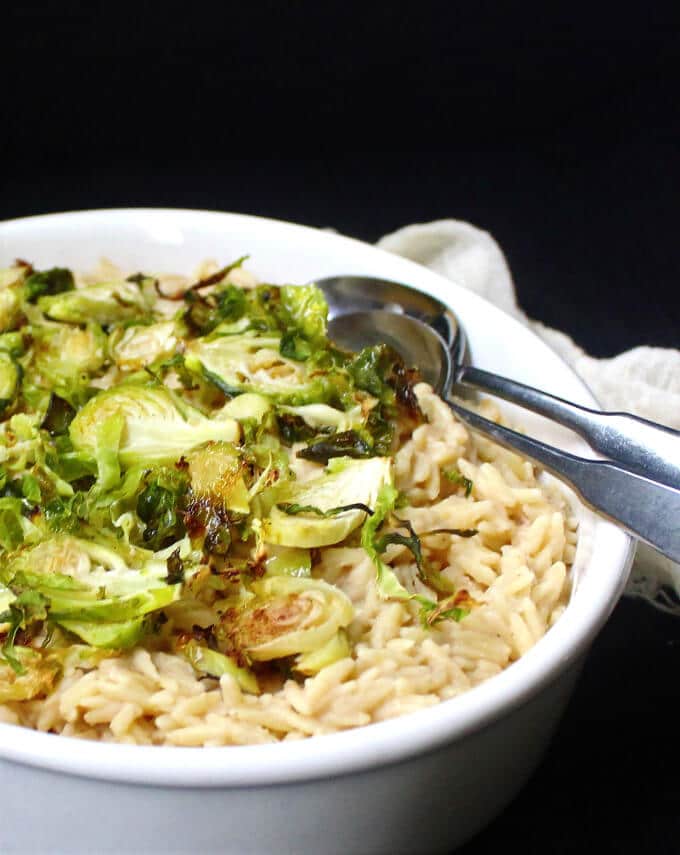 Since I last wrote a rant about Jay's eating habits, not so long after he first came home, Desi and I have been working with him on his food habits. It's been a slow road, with many pitfalls. When Jay came to us at six, he had pretty strong likes and dislikes on food, and he was not above pulling out every dirty trick in his little book. Tantrums, been there. Throwing up at the table, done that. Back in those days, something like this creamy Vegan Orzo Risotto with Brussels Sprouts, as tasty as it is, would never have made it past his mouth and down his gullet. Remember, this was a kid who hated PB & J sandwiches and couldn't stand the sight of mac and cheese.

But last night, Jay ate a decent sized plateful of this pasta, Brussels sprouts and all, and he ate it in 20 minutes. 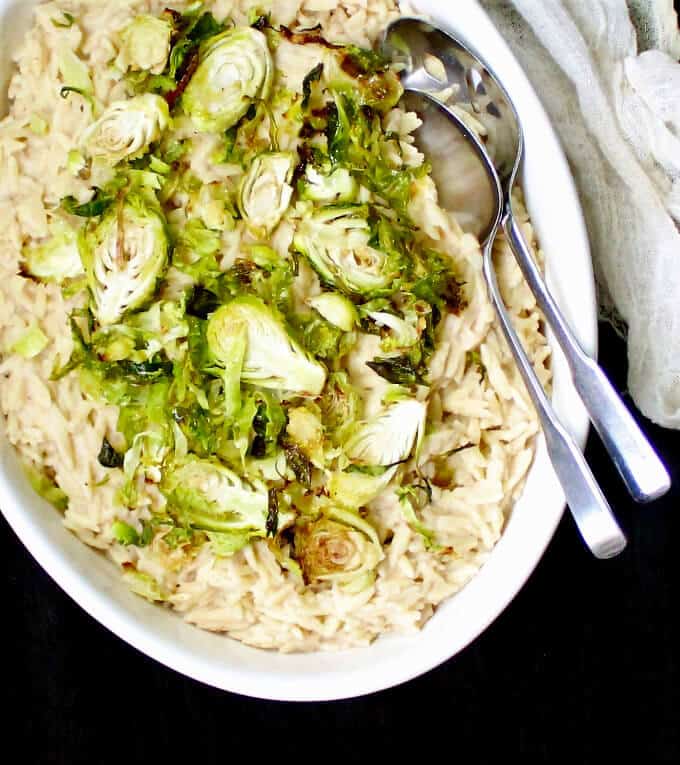 Part of the reason is that he is definitely eating better. We've always required that Jay eat what we eat, even if it's just a little, and he does not get any substitute meals. If he doesn't eat what's for dinner, he gets to save it for his next meal. After a year or two of throwing tantrums, Jay found out that just because he didn't want to eat a meal, it was not going away. Now he will try and eat most veggies and foods. Eggplants, once a no-no, are a favorite. Same with broccoli. Pasta, once abhorred, goes down swimmingly, especially when there's a marinara sauce over it. Mushrooms and Brussels sprouts can still be a bit of a struggle, but they do get eaten eventually. And oh yes, he loves PB & J.

But a big part of why this creamy vegan orzo risotto went down so well is that it is just so delicious. If you know someone who will not eat Brussels sprouts, have you tried roasting them? There are few foods as tasty as caramelized, slightly crispy Brussels sprouts. I could just snack on them all day, honestly.

With the creamy, delicious pasta sauce, made with mostly white beans, the Brussels sprouts are mindblowingly good. You don't have to be a kid to love this dish. You just will. 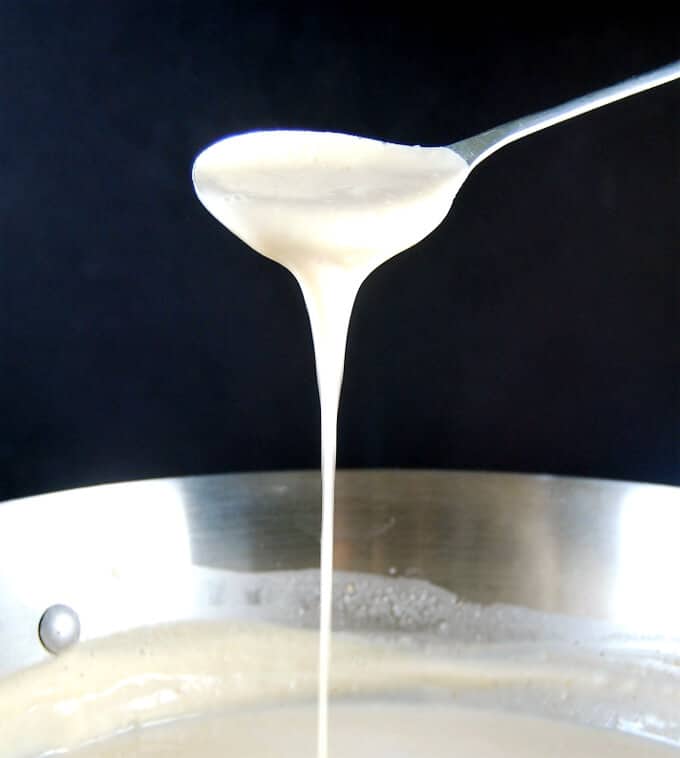 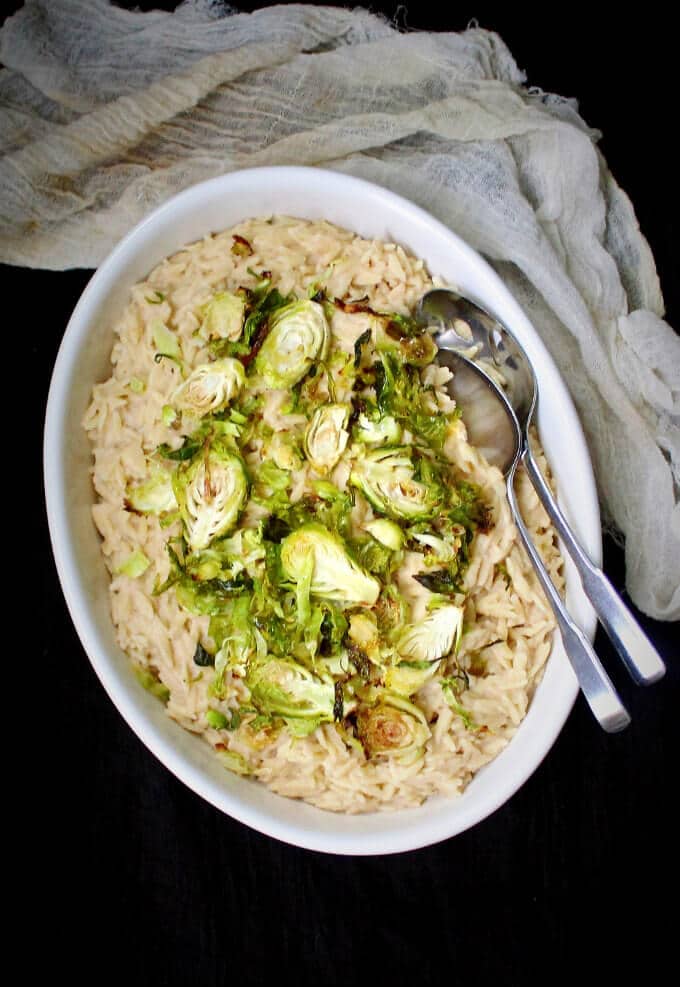 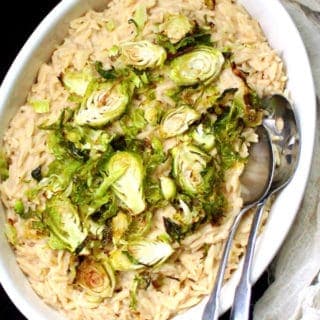