This 15-Minute Shredded Brussels Sprouts Stir-Fry has an Indian flair. It is made savory and delicious by a few simple spices, herbs, and a smidgen of chickpea flour. You will be back for seconds, and more. 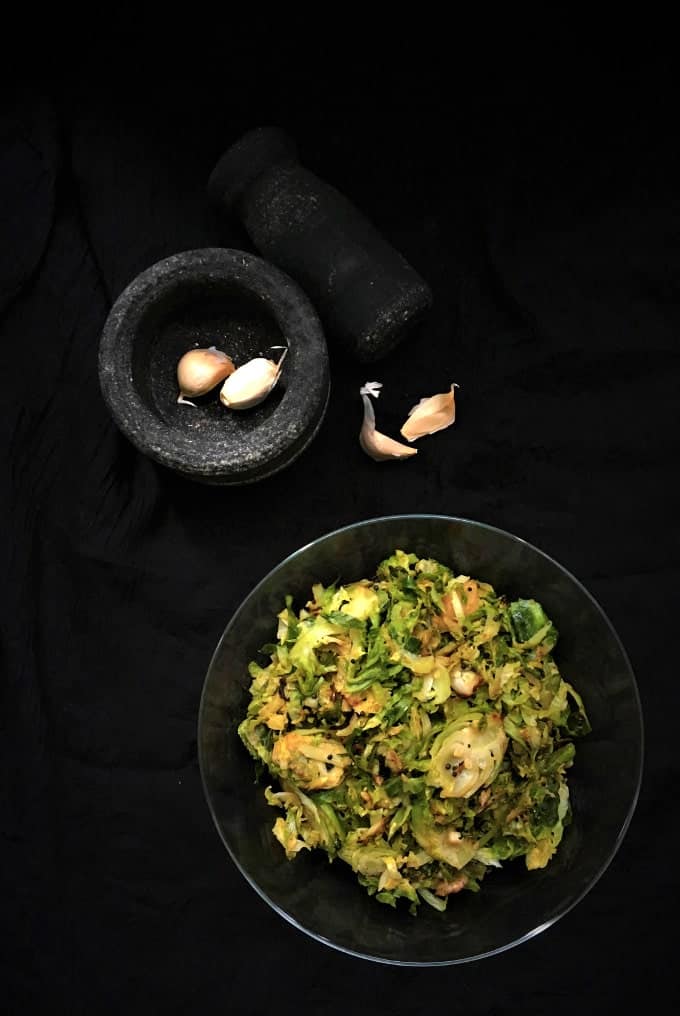 Spring for me, as always, has started out with lots of plans for gardening, eating more fresh fruits and vegetables, cooking and experimenting more, finding new, delicious things to throw on the barbecue grill -- but also getting out of the house and kitchen more to enjoy the outdoors.

I don't spend a lot of my day in the kitchen, as contrary as that may seem, because I am, after all, a food blogger who's been doing this for nearly a decade now. Other than perhaps half a dozen unscheduled breaks over the years, usually due to a pet loss that seems to always sap me of all energy and drive no matter how prepared I think I am, or the occasional bout of mind-numbing laziness, I have tried to be consistent with cooking and sharing my ideas with you during this time. 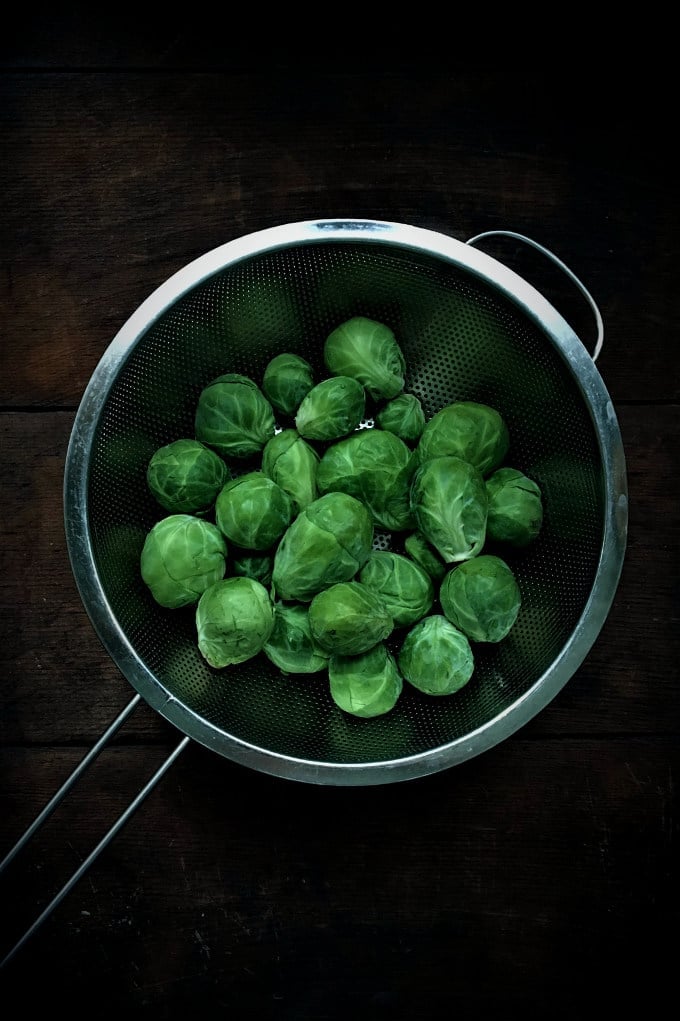 But as much as I love being in the kitchen, I love getting out fast, because there is so much else to do. Luckily, we live in times -- unlike those that cooks of a previous generation did -- where cooking has been made convenient by every kind of gadget and appliance imaginable.

Because I love to do most of my cooking from scratch, I often turn to the few appliances I have for help. With vegetables like Brussels sprouts, a food processor can be extremely handy, because you don't have to go through the pain of slicing every individual sprout which can take a good bite out of your time.

The first couple of times I made this Indian style Brussels sprouts stir-fry, I shredded the sprouts using the grater blade with the largest holes, but the resulting shreds were too small and cooked too fast-- something that didn't really work for me because I like my sprouts to be cooked just to that point where they are tender enough to give easily under your teeth, but al dente enough to offer a little fiesty resistance. 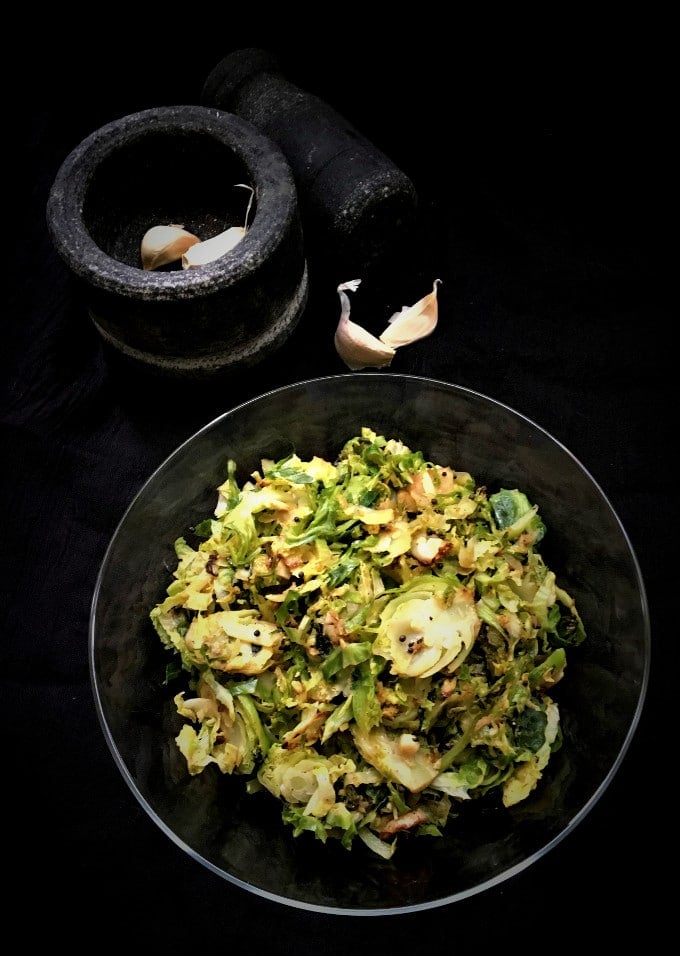 This time, I used the slicer blade, and I was really happy with the results. The blade sliced the sprouts mostly into shreds, while leaving a few cross-sections intact: a really pretty effect, I think, for the final dish.

Shredding the Brussels sprouts also reduces the cooking time considerably, as you can imagine, because the heat can penetrate the shreds much faster than it can a tightly packed globe.

You don't really need me to tell you why you should eat Brussels sprouts-- if you're reading this, chances are you love them already. But in case you need some affirmation, they are:

Try these Indian vegan recipes next:

Mushroom Matar, Mushrooms and Peas in a Creamy Sauce

Try these recipes with Brussels sprouts: 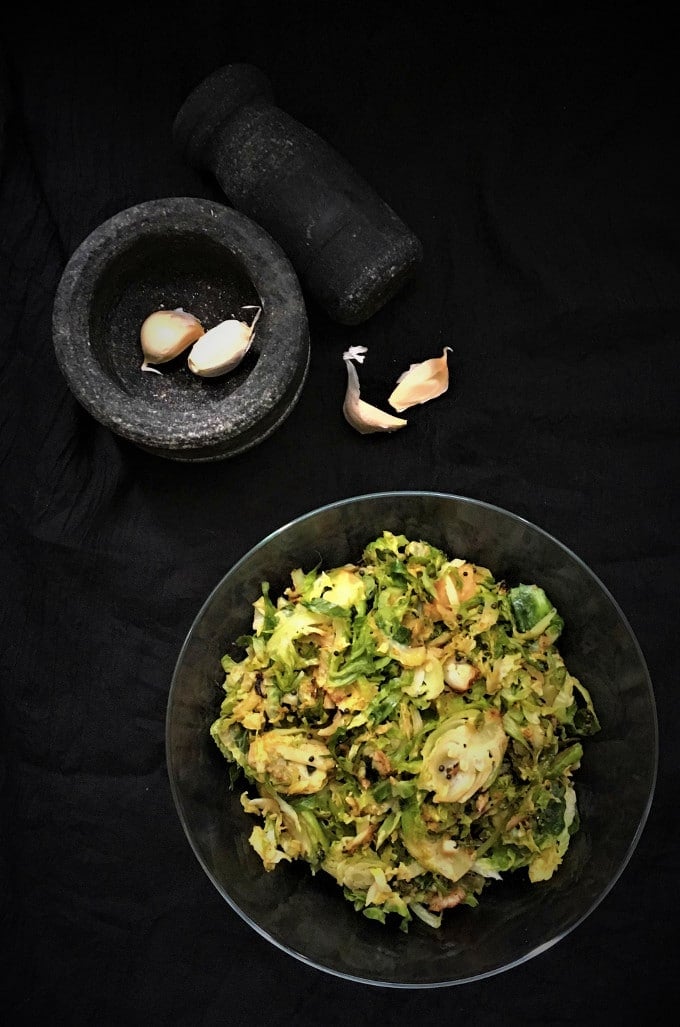