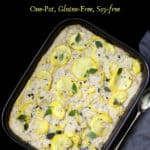 This savory vegan Squash and Rice Pudding has all of summer's best flavors in a bowl. Yellow squash is baked into a creamy rice pudding with herbs like oregano and basil. Vegan, soy-free and just eight ingredients. Can be one-pot.

Desi pointed me to a recipe for a savory squash and rice pudding in the Washington Post, and I became obsessed, the way I sometimes become obsessed with a recipe that sounds totally delicious but doesn't work for me because it's not vegan.

The article said the pudding dated back to the early 1900s and had its origins in the South. That fascinated me, along with the fact that the flavors sounded so seasonal and so clean. Other than the two main ingredients, the rice and the yellow squash, there were just a handful of ingredients, mainly herbs -- basil and oregano -- and seasonings like salt and pepper.

How could something so seemingly plain sound so tasty, I wondered. I just had to solve the mystery.

So I did. And it made me happier than you can imagine.

This squash and rice pudding is a revelation. I had to diverge quite a bit from the recipe in the Post because it used cream and sour cream. I subbed with coconut milk and cashew cream. And I made my version creamier, because I like my pudding creamy.

I also added a bit of garlic, because garlic makes everything better, and I wasn't wrong.

Another big change I made was to make this recipe one-pot-friendly. That is, if you use a cast iron skillet or any skillet that can go from the stove top into the oven. Because if you're one of those people who doesn't like to cook their squash in a skillet, then their rice in a pot, then put it all together in a baking dish, and then spend the entire evening doing the dishes, you're exactly my kinda people.

The name of the recipe, with the pudding and all, seems to lend itself naturally to breakfast, but this dish is perfect anytime eats. It makes a great brunch, lunch or dinner or any other time you care to eat. Plus it feeds an army, so it's great to make ahead for a few meals during the week, or for a day of good eats with friends and family.

How to make this Savory Vegan Squash and Rice Pudding

I can certify this recipe as kid-friendly because Jay loved it, and asked for seconds. Try it, and if you do, be sure to come back and let me know in the comments below. 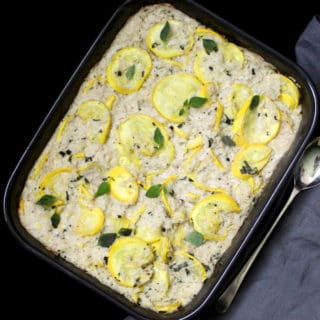 This savory vegan Squash and Rice Pudding is all of summer's best flavors in a bowl. Yellow squash is baked into a creamy rice pudding with herbs like oregano and basil. Vegan, soy-free and just ... ingredients. Can be one-pot.