A lasagna can be fairly time-consuming to make, what with making all those different elements that go into it and the layering and baking and so on. But I make it all that much easier for you with my vegan Instant Pot Lasagna. Now you can eat lasagna for a weeknight dinner--or for a special weekend meal with family or friends! And you can make it gluten-free.

Jay's a bit of a Garfield, in more ways than one, and one of those ways is his love for lasagna.

I don't think he's ever met a lasagna he doesn't like, and he loves my traditional vegan lasagna something fierce. So to keep my baby cat well-fed, I came up with this quick version of a lasagna that's made in an Instant Pot. A Vegan Instant Pot Lasagna.

This is not an approximation of a lasagna made in an IP with free-floating noodles -- it's a lasagna proper, layered and cheesy and filled with the tomato-ey goodness of my easy homemade marinara (although you can definitely use storebought).

I pretty much made this the way I make a traditional vegan lasagna, except that this time, when I had Desi photograph it, I used gluten-free lasagna noodles. It works just as well with regular lasagna noodles.

I wanted this recipe to be fuss-free so I didn't make it inside a springform pan or anything like that--I just cooked it up directly in the IP liner, and it worked fine. The only downside of this is that you can't quite slice it as neatly but who cares about that when it tastes SO good.

What we love about this lasagna 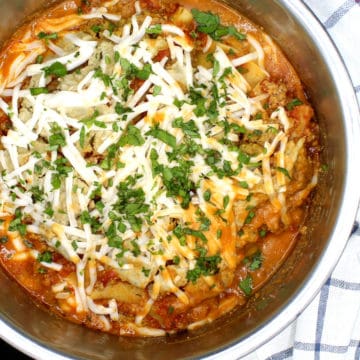 For the cashew ricotta: