A four-ingredient vegan Cashew Parmesan that tastes so good, you might have a hard time keeping yourself from scarfing it down by the spoonful. Sprinkle over pastas, on salads, or anywhere you'd add a dash of salty, cheesy parm. Vegan, gluten-free and soy-free recipe.

Since I became a vegan eons ago, I have gotten used to eating pastas without the cheese, and I have no complaints. Most vegan pastas are so flavorful, filled with nuts, veggies, beans, and herbs, that they don't really need that cheese. But when I make some super-simple pastas, like Aglio e Olio, I love a dash of something salty and cheesy to top it with. And this gorgeous Vegan Cashew Parmesan fits that bill beautifully.

There are just four ingredients in this vegan parmesan, in addition to salt and pepper.

Better still, it takes literally two minutes to zap it up in your food processor. And you can control the consistency. I like my cashew parm coarse with some texture, but if you like yours super-fine, blitz it all a little longer.

The cashew also adds some extra protein to the recipe, so what's not to love?

To sprinkle my vegan parm over this time, I made a fresh, easy Garlicky Pasta with Asparagus. But you'll have to wait until tomorrow for that recipe.

Recipes to make with vegan parmesan 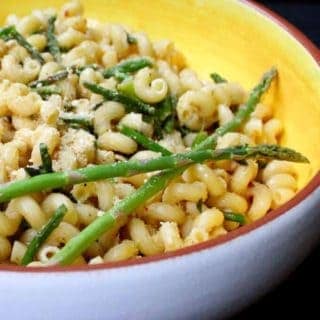